The unseasonably sunny (if windy) Edinburgh afternoon that graced the Auld Reekie Roller Girls Twisted Thistles (home) bout against Rainy City Roller Girls (away, Manchester) couldn't have been a worse omen for the away team. Despite this poor sign from the heavens, the Rainy City girls kept the game creditably close, bringing the final score to 92:109 to the home team.

First period
From the first seven jams of the bout, no-one would have predicted the final score would have been so tight. Whilst the first jam was a cautious no-score, both teams taking each other's measure, the second saw ARRG Captain and jammer Zillah (555) take lead jammer, and score 3 full passes whilst the ARRG blockers kept Rainy City's Ice-berg (66) penned in. Despite an attempted fight back in the very next jam from Rainy City captain Missy Rascal (6), capable pack work from the ARRG blockers (especially Velosidy (16), Minnie Riot (7) and Juicy Lucy (666) ) prevented her from taking more than 4 points. The rest of the early jams were back to the standard of the second, with ARRG Jammers Zillah and Juicy Lucy piling on the points, and the ARRG blockers walling the RCRG's Missy Rascal and Ice-berg out. 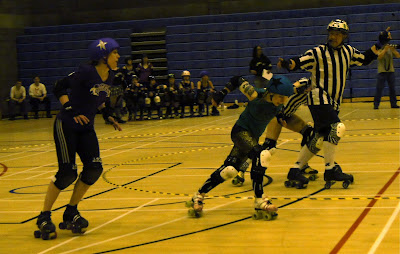 The seventh jam looked like it was going the same way, with ARRG's Blazin' Phoenix (28) taking lead jammer and set to score points. However, ARRG's blocking was more sorely tested than before, and RCRG's Missy Rascal impressively evaded and leapt out of the pack, ARRG's Crazylegs (11) being sin-binned as a result.

At the end of the seventh jam, though, things looked bleak for the Manchester team, with the score standing at 41 points to ARRG and only 4 to RCRG.
Understandably in need of a tactical rethink, and some morale top-up, the Rainy City coach called a Time-Out.

Whatever wisdom Vital Sadistic passed on to her charges seemed to have an almost magical effect. With ARRG already one blocker down, RCRG's Ice-Berg effortlessly took lead jammer; to make matters worse for the Edinburgh team, Zillah's attempt at piling through RCRG blockers in pursuit resulted in her visiting the Sin-bin instead, handing her opponent a Power Jam. Facing a severely depleted ARRG pack in the next jam, Missy Rascal happily took advantage of her good fortune, achieving 3 scoring passes before the 2 minutes were up, for a 13 point gain.

Buoyed up by their resurgence, the Rainy City Roller Girls seemed to up their game for the rest of the period, with Lead Jammer alternating between the two teams jam by jam. If anything, the advantage was still somewhat to the home team, with Zillah's speed enabling her to quickly catch up to her opponents even when she didn't get out of the pack first.

With less than 3 minutes left in the first period, the score stood at 34 RCRG, 67 ARRG.

And then, for the second time in the bout, the Team Captains faced off as Jammers… Missy Rascal took the lead, and Zillah ended up in the sin-bin for her troubles. This was starting to look like an unfortunate trend for the ARRG team captain, and it was catching, as at one point all but one blocker (Crazylegs, bucking the tradition for the bout) also ended up joining their Captain in sin during the proceeding jam. Obviously, faced with such a tempting target, Missy Rascal took no time in racking up the points for an impressive 19 point Power Jam… right before the half-time whistle called. 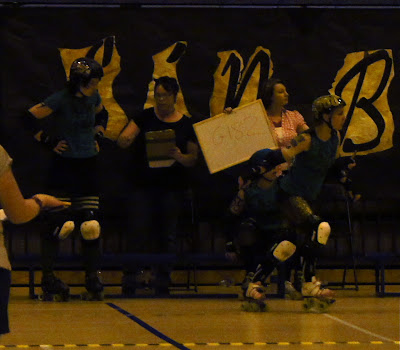 So, with this last-minute infusion, at half-time, the score stood at a close 53 RCRG, 67 ARRG.

The second period continued much as the majority of the first period had, both teams achieving lead jammer and points, but the superlative speed of ARRG's ZIllah and Juicy Lucy often letting them rapidly close down on their opponents to deny them the jam. The Rainy City girls opted for more practiced cooperative play, with both Missy Rascal and Ice-berg benefitting from well executed whips and other assists from their team, and RC blocker De-mise (18) proving an especially effective blocker - both at providing whips to her jammers, and at knocking down the opposition. Despite their teamwork, however, by the start of the 11th jam of the period, Rainy City had failed to make a mark on the home team, with the score standing at 63-90. 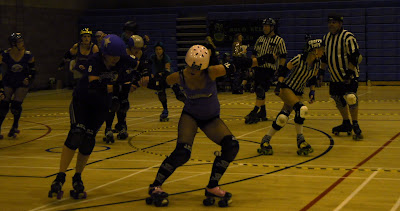 Usually, being a referee is the safer choice, but Jam #11 of this period demonstrated that this isn't always the case as ARRG Jammer Referee Cherry Fury was knocked down by an impact across her midsection, resulting in an official Time Out being called. Luckily, despite being winded, she seemed relatively unharmed, although opting to take the less-strenuous role of Outside Ref for the remainder of the period. 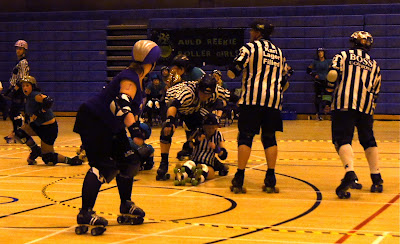 After Cherry's unexpected experience of blocking, the falling bug seemed to be catching; the next series of jams showed a significantly higher rate of tumbles and pile-ups, but no particular changes in the score. Less than 5 minutes later, the seemingly inevitable happened, and a block between Blazin' Phoenix (jamming, ARRG) and Ice-berg (blocking, RCRG) ended up taking down multiple other skaters, and sending Blazin' to the sin bin.

As she'd demonstrated twice before in this bout, Missy Rascal knows how to manage a Power Jam, and she managed to better her previous performance this time, bringing in 20 points in the remainder of the jam. 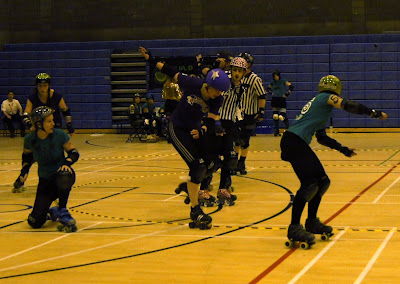 Unfortunately for the away team, Juicy Lucy wasn't taking this lying down, and neither were the ARRG blockers. Encouraged by roaring from the stands, Juicy managed to take Lead Jammer, despite the best efforts of Belle-Istic (13) and Dollface Diablo (16, Pivot) , whilst ARRG's Crazylegs, Mo B Quick (66) and Minnie Riot kept RC's Whoops C Daisy (1006) safely contained. After multiple scoring passes by Juicy, the score, now with only 3 and a bit minutes to go, was 92-105 to the home team. 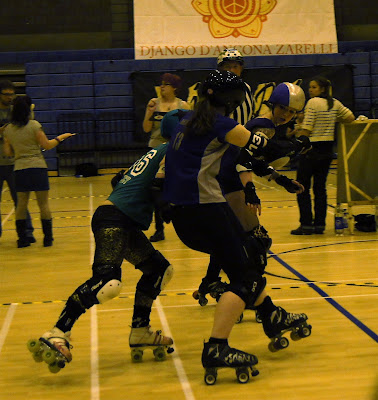 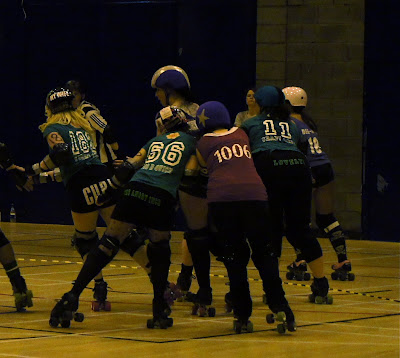 After a hasty Time Out for the away team, it looked like the score might swing back the other way in the very next jam, with Missy Rascal effortlessly threading the pack to take Lead Jammer. Unfortunately, she couldn't match Zillah's speed, and called off the jam without scoring just as she was passed.

For the final two jams, despite another Rainy City Time Out, nothing much changed. First jam saw Juicy Lucy gaining LJ, and just letting the jam run to burn off time. Despite her relaxed approach, she still managed to pick up 4 more points (while Minnie Riot ended up in the sin bin). With the final jam an evenly matched no-score, the bout ended with the score

92 Rainy City Roller Girls : 109 Auld Reekie Roller Girls
Final Jam: http://www.youtube.com/watch?v=k-Tsij57ngA
Acknowledgements should go to the excellent Bout Tweeting by the Auld Reekie Tweeter (@AuldReekieRG ), without which supplement to my own notes this bout report would be the poorer.
Photos taken on a Sony alpha A580 with the kit lens, showing you can get passable results without an expensive kit.
Posted by Unknown at 18:41:00