The 29th of September saw Glasgow Roller Girls host their traditional Hallowe'en themed bout, with fancy dress and a generally ghoulish theme. While the bout against Rainy City is the regular feature, this year's "Monster Bash" was a double-header, featuring new Swedish team Malmö Crime City Rollers first up on the agenda. Facing Glasgow's 'B' travel team, the Maiden Grrders, this promised to be an exciting bout.

First up, of course, we have to be introduced to all the skaters: http://www.youtube.com/watch?v=NwbSRQmACSg

For almost the entire first period, Malmö Crime City Rollers and the Maiden Grrders looked almost inseparable in performance. Despite an early power-jam handing GRG's Fightin' Torque (531) the chance to pick up 14 points, only two jams later Jess E Ska (31) handed the sixth and seventh (VIDEO) jams to Crime City, JJ Fury (159) and Curly Håår (100) taking advantage of their own power-jams to reverse the situation, until a bad challenge in jam seven saw the CCR jammer sent off herself. Entering the eighth jam once again with only their jammer on track, and a numbers advantage in the pack, the Maiden Grrders took a knee, and the chance to push the score once again in their own direction. With the Malmö blockers outnumbered, they were unable to prevent GRG's Rogue Runner (210) from picking up an impressive haul, two more skaters finding themselves sent off for blocking out of play as the home team simply stood still on the track!

The excitement wasn't finished, however, with Peggy Su-icide getting herself sent off in the very next jam, CCR's Ankefar getting the chance to show her own mettle on the track, bringing home 24 points in a single jam!

After all that penalty time, both teams seemed to have worked out their tensions, and the next five jams saw more cautious play, the home team gradually eroding the small points deficit, starting with a conservative tenth jam (VIDEO) from Fightin' Torque, and continuing through the 13th (VIDEO), bringing the score eventually to a close:

at the end of the 15th jam. All this was about to change, however.

With only 4 minutes left in the bout, it was GRG's Peggy Su-icide up, jamming against Malmö's Happy Army (217). (VIDEO) Both jammers were given a hard time, Happy Army skipping around Grrders co-captain Haberbashery (40), before encountering the two-woman blocking team of Jackash (911) and Mazzy Chaos (R10T) out front. Being blocked out into the crowd wasn't the worst of it, for the CCR jammer, who was immediately sent off for track-cutting, just as Peggy Su-icide took lead jammer. With the Glasgow blockers simply stopping at the edge of the track, Crime City seemed unable to get things moving again, wary of their experience of jam 8; with the addition of some excellent jamming, this resulted in a massive 28 point power jam for the home team!

For the first time in the bout, there was a clear leader, the score now (with one jam left in the period) at:

Shrugging off this last minute blow to their chances (VIDEO), Ankefar dodged past GRG's Lola Bruises (96, pivot), while teammates Barbara Barfight (101, pivot) and Fröken Smacky (85) made things hard for GRG's Rogue Runner, who was freed only after the pack was intentionally split (and after a scoring pass by Ankefar). With much more resistance on her second pass, especially from Lola Bruises, the Malmö jammer didn't manage to call it before her opponent also picked up a couple of points, leaving the score at half-time:

-
After a half-time filled with costume contests (for which the Bride of Frankenstein won the adult costume prize), and unexpected performances...

Returning to the second period, Malmö had clearly been given a pep talk from their coach. Over the first five jams, they outplayed the home team, wearing away at the spoils of that late power-jam inexorably. Jam 1 (VIDEO) and jam 4 (VIDEO) are reflective of the experience; Ankefar picking up a good lead over GRG's Rogue Runner thanks to good walling from pivot Barbara Barfight, Fröken Smacky and Belgian Bob*(88), and then Curly Håår totally outskating the GRG blockers to take the lead in jam 4. So cohesive was the CCR blocking that Jess E Ska had to resort to a star pass in the third jam, handing over to pivot Lola Bruises, just to limit the away team's scoring to a pair of passes in the jam.

At the end of jam 5, the away team had actually taken the lead, the score now sitting at:

Jam 6 initially looked like it would be the start of a Maiden Grrders push back, Peggy Su-icide taking lead jammer for GRG for the first time in the period, only for CCR's JJ Fury (159) to overtake her on the track, nullifying her advantage. It was only in the next jam (VIDEO) that Fightin' Torque acquired a good enough lead to bring home a single scoring pass, a performance that they couldn't sustain into jam 8, Malmö's Happy Army instead taking lead jammer while most of the Maiden Grrders ended up in the sin-bin.

Indeed, with jam 9 (VIDEO) another no-score, and jam 10 seeing the Malmö team once again scoring it wasn't looking that good for the home team, with the score halfway through the period standing at:

As with the previous period, it was a power-jam that properly kickstarted the home team's return to the game. With Ankefar and Fightin' Torque racing each other through the pack, it was the CCR jammer who make it through first, only to be sent straight to the sin-bin for an illegal procedure. While some exceptional walling from CCR's Sister Stitch (2), Venom (11), Fröken Smacky and Happy Army delayed the GRG jammer for some time (despite Happy Army getting herself sent off for blocking out of play), eventually Fightin' Torque won through, with GRG holding the pack almost stationary as in the first period. Things got even worse for the away team, however, with Ankefar returning to the track only to almost immediately get sent back off again, just in time for the end of the period. Despite Malmö taking a time-out to argue against their jammer's position, jam 12 (VIDEO) started, with Ankefar still in the sin-bin, and GRG's Zombilina (15) capitalising on the second power-jam in a row to pick up yet more points for the home team.

Two jams had completely reversed the situation on track, the score now standing at:

GRG couldn't maintain the momentum, however, failing to accrue any points in the next two jams, Rogue Runner picking up only a pair of points in jam 15, and jam 16 (VIDEO) yet another no-score, Fightin' Torque unable to outpace Ankefar on the track.

It was the seventeenth jam before any real movement happened, with only 8 minutes left in the bout. With CCR's Curly Håår slipping around the outside line to take lead jammer, GRG's Rogue Runner found herself trapped behind an impenetrable wall. Unable to pass Sister Stitch and Fröken Smacky, the Maiden Grrders jammer picked up a trip to the sin-bin instead, and Curly Håår capitalised. With her teammates slowing the pack, despite some determined blocking from the home team (which resulted in two trips to the sin-bin), the Malmö jammer managed to pick up 20 points by the time Rogue Runner returned to the track, bringing the scores back to within a single point:

A tense series of jams followed, Fightin' Torque effortlessly taking lead jammer in the first (VIDEO), but with only two blockers to oppose her, Happy Army only a short distance behind. Two points to GRG; just enough to switch the lead over, but still only with a single point in it! Ankefar faired a little better in jam 19 (VIDEO), out of the pack while Rogue Runner struggled once more with great defensive walling; the CCR jammer was missing lead status, however, and as soon as Rogue Runner escaped the pack (with the help of Zombilina), she called it; but not before the score had swung the other way, with a whole 5 point lead for the away team.
With only enough time for one or two jams, the Maiden Grrders would have to manage something special, and Fightin' Torque did (VIDEO), taking lead jammer and multiple scoring passes while some excellent waterfalling and walling from Mazzy Chaos, Jess E Ska and Mona Rampage (22) kept Curly Håår locked up in the pack. The result? The fourth lead change in as many jams, with GRG now sitting with a 6 point lead entering the final jam of the bout.

Ankefar knew that a Malmö CCR win was on her shoulders, and she fought her way through to take lead jammer, despite a parting block spinning her half around (VIDEO). With more than half a circuit's lead over Rogue Runner, Ankefar easily completed her first scoring pass, slipping past the pack without the Grrders even noticing. To the surprise of the crowd, however, she almost immediately called the jam, despite needing a second pass for her team to actually win.

With that tactical misstep, then, the bout ended, the final score: 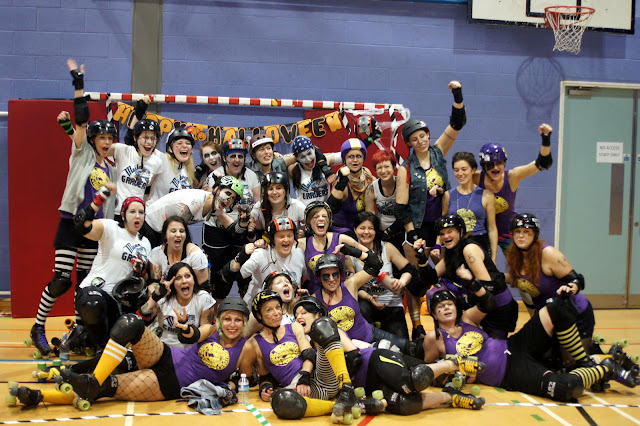 After a tremendously hard-fought final third, neither team really deserved to lose here; although, sans-power-jams the bout would have been much less close. Crime City Rollers can particularly congratulate themselves on an exceptional opening to the second period, as Crime City captain, Barbara Barfight, and jammer Ankefar noted when I caught up with them after the bout. Asked how they felt the bout had gone, they responded positively:

Barfight: I think we have a team of very different types of skaters; we hadn't played that much together in this specific team and [with] these players. I think that we did a very good job today: we worked well together building our walls, and the jammers did a really good job too (laughter from Ankefar) . I think that we did, in the second half of the bout,  an even better job; I think we caught up a bit.
And it's difficult to, to come here and to know how the Glasgow girls will play. That's always difficult to know.

Ankefar: but we've learned very nice things that we can take with us back home.

With Team Sweden about 50% Crime City skaters, this performance can only bode well for their performance in the World Cup next month! Of course, the winners here were the home team, who also upped their game in the second period, Fightin' Torque in particular showing her usual high quality jamming.

Thanks to the Glasgow Roller Girls and Malmö Crime City Rollers for an excellent game.
Thanks also to the creator of the bout programme, and to announcers Helliverance and Handsome Joe Hanson.
The video and photographs used in this report are all taken by me on a Sony A580 with a second-hand 24-105mm Minolta AF lens, and no flash. A playlist of video and album of photos from which they are drawn are at:

Professional photography for GRG is handled by the excellent Dave McAleavy, who has a website for his bout photos.

As always, this report, and any inaccuracies within it, are purely my own. All corrections and comments are gratefully received.
Posted by Unknown at 21:09:00

Wow just a great "walk- through" of a fantastic experience in bonnie Glasgow! I had a blast and this Bout in particular is the highlight of my involvment in the fantastic sport of Roller Derby to date....
Well written and thanks for having us!
Handsome Joe Hanson
Crime City Rollers