Part one of this report, covering the introduction, and the first bout (Cherry Bombers vs Glasgow Roller Derby's Hell's Belles) is here.

Facing each other for a second time, most people's money might have been on a Leithals victory; in their first match up, The Skatefast Club lost by a significant margin, 116 points to the Leithal Weapons' 209. Since then, however, Skatefast showed considerable improvement, fighting the Cherry Bombers for a hard-fought victory to get to this final. On that basis, this final was still anyone's to call. 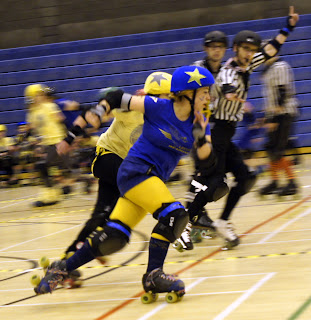 It was The Skatefast Club first off the mark as the bout started, Mo B Quick (66) fighting her way down the inside line just ahead of the Leithal's Admiral Attackbar (11:11), thanks to Mallory Powers' (9) blocking. With just enough of a lead to risk a score, Mo did so, picking up 2 points for the lemon team.
A power-jam for the Leithals in jam 3 helped Sharkée (273) break their duck, with Bint Imperial (893) off for a track cut major on her initial pass. A second scoring pass saw the Leithals jammer also off to the bin, however, for a back block on approach, handing the track back to Skatefast. Despite some tough walling from the blues, especially Alma Geddon (42), 2 scoring passes later the jam ended, with the power-jam still in place; just enough time for Blazin' Phoenix (28) to consolidate the Skatefast lead with another scoring pass in jam 4: 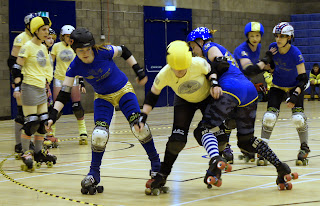 Despite a tough rear wall holding Ciderella (3) back to allow Skatefasts' Mo B Quick (66) a good half track lead, both jammers scored in the next jam, the Leithals keeping to the front of the pack. A slightly too aggressive path through the scrum start in jam 6 saw Leithals star jammer Admiral Attackbar off to the penalty bench in the very next jam, however, handing Blazin' Phoenix her team's second power jam of the bout. Despite heavy resistance on her initial pass, being recycled far back by Sharkée, Blaze picked up a hard fought 12 points, with time to call the jam as Attackbar was standing.
A very determined Leithal Weapons wall forced Double D'struction to waste the remaining power-jam time still trying to escape the pack, however, allowing a returning Attackbar to show what she was really capable of and grab lead jammer and a single scoring pass!

The score entering the middle third of the period

both teams now had each others' measure, and the next ten minutes saw relatively even trading of scoring passes between jams, the balance slightly to the Leithals as Ciderella and Admiral Attackbar slowly ground down the score differential.


By the 18th jam, 19 minutes into the period, there was barely a single scoring pass between the scores. With both teams lingering on the track to free blockers from the bin, it was Skatefast who reached full strength first and broke the pack to free jammers, Crotch Lighting nudging the Leithal Weapons' Ciderella off track as they passed her without the jammer noticing. Blazin' Phoenix pushed her way to the front of the pack and lead jammer for the lemon yellows as Ciderella finally realised that it was her the referees were shouting at and slipped into the penalty box. Despite some determined walling from the blues, especially Minnie Riot and Alma Geddon, Blaze still managed a solid three grand slam passes before calling the jam early. 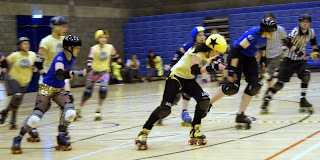 The early jam call once again gave a supposed advantage to the next Skatefast jammer up, but the Leithals repeated their performance from the last time they tried this, Minnie Riot, Alma Geddon and Kaos Moss waterfalling Skinn'er Alive until a returning Ciderella exploded on to track, literally muscling her way through the Skatefast blockers to take lead jammer. The jam was too close for Cider to score, but at least the Skatefast scoring run had been stemmed, albeit after having restored their previous 20 point lead.
Despite a tough wall from Apocalypse Cow, Mallory Powers, anchored by Crotch Lighting, Admiral Attackbar immediately began eating away at that differential in the very next jam, pulling out a single scoring pass against Bint Imperial; Ciderella was not quite able to continue the process in jam 21, Skatefast's Blazin' Phoenix proving just as fast as her once again.

So far, the balance of jammer penalties had been on the Leithals side. With Bint Imperial facing off against Admiral Attackbar in jam 22, it was the Skatefast jammer who picked up the penalty, however; handing the Leithal Weapons their first full power-jam of the bout. With only five minutes in the period, Attackbar confirmed that she was more than capable of exploiting a power jam, pulling in a 3 grand slam scoring run that pulled the scores precisely level at: 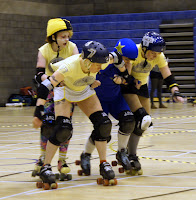 With Minnie Riot (7) and Ciderella pushing the score further for the Leithals in the subsequent jams, it seemed more than possible that the period would end in a complete reversal, with the score differential reaching 14 points in the blues' favour.

A knee start for The Skatefast Club launched Mo B Quick and Minnie Riot through the pack near neck and neck for the final jam of the bout; the Leithals jammer had cut track doing so, however, and ended up in the penalty for another Skatefast power-jam.
Even Mo was unable to completely overturn the last minutes of Leithals work, though, leaving the score at the end of the first period a very very close:

After a rapid half-time, due to timing constraints on the hall, both teams returned to the second period determined not to give up any points to the opposition.
A very closely contested first 3 jams saw only a single scoring pass, the Leithal Weapons' Admiral Attackbar taking an open outside-line through the pack, while Blazin' Phoenix found herself obstructed at the front of the pack by some of that tough Leithals walling.
Their next match-up in jam 4 was decidedly more mixed; Attackbar once again just taking lead jammer ahead of Blaze, only for the Skatefast jammer to accelerate past her, pushing past the attempted block and forcing Attackbar to recover her balance on one leg. Despite immediately trying to call the jam, the Leithals jammer instead picked up a trip to the penalty box, possibly for a low-block during her duel with Blaze. Now uncontested on track, Blazin' Phoenix proceeded to do her usual excellent work in a power jam, fighting her way through the Leithals' trademarked Alma Geddon-anchored walls each time; without lead jammer status, she was powerless to stop Admiral Attackbar also scoring points as the power jam came to a close, however, the jam ending with both teams' scores boosted to:

The penalty excitement didn't stop there, however, with a confident Skatefast pack letting Skinn'er Alive slip through the inside line before immediately closing against Ciderella with an anchored wall of Lilo and Stitches and Mallory Powers (Mo B Quick anchoring). With Skinn'er taking lead jammer, it could have been an easy scoring pass for her, if she hadn't collided with the backs of Bullet-Proof Glass and Kiki (2) picking up a back block major. Things still weren't quite finished, despite Ciderella making good use of the power-jam to begin to equalise the scores, she couldn't avoid her own back-block penalty on what would have been her final scoring pass; the game of jammer musical chairs freeing Skinn'er to hoick the score differential back up to nearly where it had lain before the jam began. The Skatefast Club couldn't hold onto the initiative for much longer, however, with Double D'struction pushing the score ahead with a second scoring pass in jam 6 as the power-jam expired (despite a 3-2 pack advantage to the Leithals), but also scoring their last unopposed points of the run, bringing their lead to a high of

The continuing numbers advantage to the Leithal Weapons helped Admiral Attackbar storm through to lead jammer in jam 7, heralding a run of scoring for the blues over the yellows for the remainder of the bout. By the start of jam 10, the score differential had been narrowed to only 5 points, by the end, thanks to some last-second recycling of Mo B Quick by Minnie Riot, a pair of scoring passes by Ciderella had turned that into a 4 point lead for the Leithals. 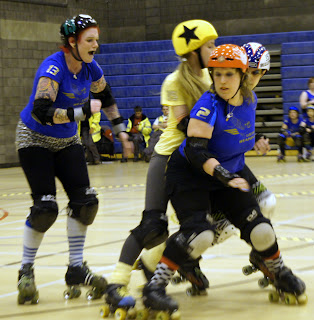 Ciderella and Admiral Attackbar continued their excellent work for the rest of the bout, slowly edging the score differential up, while Skatefast's jammers found the Leithals' blocking delaying them time and again with unbreakable walls wether at the front or rear of the pack. While everything didn't go entirely the Blues' way; Skinn'er Alive, Mo B Quick and Blazin' Phoenix managing a scoring pass apiece for The Skatefast Club, and Attackbar memorably taking lead jammer in jam 14 only to call it immediately on both front wheels falling off her right skate (GRD's Moxie Blitz saved the day with a skate loan for the remainder of the bout).

Calling a timeout immediately as the final seconds ticked down, The Skatefast Club guaranteed themselves one last jam, and one last chance for a Leithals mistake to hand them a power-jam or another opportunity to bridge the 25 point gap between the scores. Mo B Quick lined up against Ciderella for yet another reprise of their contests throughout the bout... and Ciderella took lead jammer, with Kaos Moss clearing the outside line for her to pass.
Flamboyantly calling the jam after a relaxed scoring pass, Cider left the score at the end of the bout: