International Year of the Potato

Did you know it was UN International Year of the Potato?

No, neither did I, until I encountered these cream containers in a pizza restaurant in Meyrin (between CERN and Geneva): 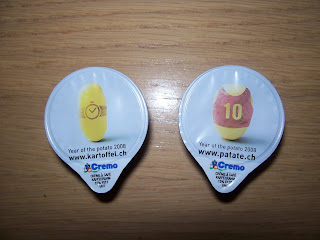 I'm oddly pleased that someone felt that the best way to advertise this was on coffee-related milk products...

Probably, most of you will be aware of the first successful ultramobile PC - the Asus Eee PC.
There's been a lot of buzz about the roughly-A5 sized cross between a PDA and a proper laptop since it was first released last year - and ever since then, I've been trying to resist buying one.

With the initial models (numbered 70x, where x is 0,1 or 2), this has been less of a problem; while otherwise lovely, they are encumbered by a tiny 7" screen at 800x480 resolution, barely enough to view a modern webpage.

However, the new model, the 900 series, is due out Real Soon Now, and one of the major improvements is the provision of a 8.9" display at 1024x600. (The other, other than increased storage, is an Apple-styled multitouch trackpad, which looks nice but isn't really important enough to matter to most people.) This, of course, is much more tempting, and it would have been very hard to resist buying one in a week or two when they're offically available here in the UK.

Except that, ironically, Asus appear to be trying to sabotage themselves. The 900 series was rushed out to its present release date to compete with all the new ultramobile PCs that other manufacturers have begun releasing, now that the market has been shown to be lucrative by the original 70x models (and the One-Laptop-Per-Child UMPC before it). This means that it still has the old, inefficient, Celeron ULV that was in the 70x, rather than the new Intel Atom processor that it was originally supposed to be fitted with. Asus say that a new model with the Atom in it is due "by the end of June", sporting significantly increased battery life (and possibly more performance) due to this alteration.

So, what's a man to do? Buy a 70x series now (despite the small screen, they have exceptional value for money, and exceptional possibilities for homebrew modification - see here, for example), buy a 900 series in a week or two, or wait (arg) until "late June" for the actual model that everyone wants... knowing that there will probably be something even better on the horizon by then?
Posted by Unknown at 20:59:00 3 comments:

I've always been a fan of structure in most things. It doesn't matter if the structure is hidden, partially or completely, although the more complex (and complicated) the better.
In fiction, this tends to result in my desire for some kind of continuity and canon to be established and never violated (of course, the weaker forms of retcon don't necessarily count as violation here, as they can simply add more baroquely interwoven layers to the existing canon); it also tends to result in my attempt to apply reason and logic to fluff which never tried to include
such concepts.

In particular, as I have previously mentioned, this caused me some disappointment with id Software's Quake series.
Recently (okay, this past weekend), I finally succumbed to the urge to buy the Quake Super Pack on Steam - this consists of Quake, and the two mission packs, Quake II, and the two mission packs, and Quake 3 and its team gameplay expansion. Since I already own Quakes 1 through 3, this was essentially just a way for me to get ahold of the mission packs for the earlier games (although, consolidation of things on Steam is always an important impulse for me).

So, once I'd acquired a suitably modern engine (the DarkPlaces engine for Quake, and ... for Quake II), I took the chance to engage in a little reminiscence.

To get my eye in, I tried Quake II first.
My initial impression wasn't actually that bad - its amazing how much particle effects and improved lighting models do to cover up low-poly models and low-resolution textures - and I was pleased to discover that a decade of playing computer games has resulted in my being significantly more skilled than my teenage self was.
However, the "Unit" system - a way of emulating giant levels by connecting several maps by two-way portals - quickly became annoying; it was very easy to get lost, both within the overly-dark sections of some levels, and also within the wider Unit itself. I frequently found myself taking the wrong two-way portal back to a level I didn't intend to revisit, or becoming unable to locate the final button to open a doorway or lower a lift.
Now, since I didn't have these problems in Half-Life, or its sequel, I shall assume that this stems from bad level design, and not my own stupidity.

The mission packs for Quake II were even worse for getting lost. Indeed, I don't think I got past the first Unit of either of them (although, in the case of Ground Zero, I think, this was because of the really annoyingly short time-limit it gave you to escape the unit before an automatic death occurred).

Essentially, my glowing memories of Quake II were sadly dimmed and crushed by the sad reality.

So, I came to Quake with somewhat lowered expectations. Surprisingly, then, I actually really enjoyed it; the level design, for the most part, was very good, the difficulty seemed reasonably placed, and everything was good. I didn't try to complete more than the first couple of levels, but what I did was very enjoyable.
And hence, onward I went, to the mission packs.
Mission Pack 1: Scourge of Armagon started out quite well, although with some uninspired additions to the array of weapons and monsters, but the end boss, Armagon himself, seemed extraordinarily unchallenging (I ran around him in circles shooting at him, and he rotated, very slowly, failing to ever actually face me enough to shoot at me) and also particularly boring in his design. The only saving grace were the Gremlins - sort of mini-Fiends, with the ability to steal your weapons (but easily distracted by the chance to eat the corpses of their comrades).
Mission Pack 2: Dissolution of Eternity gains additional points for the very silly title and for the statues (statues of knight-type monsters that "awaken" on various triggers); however, I was rather unconvinced by their "tough" monster addition - the Wrath (functionally, a flying Vore which explodes on death), and the majority of the weapon upgrades ("better" nailgun, "better" rockets and cluster grenades). The mid-game boss - a bigger, badder, Wrath - was seriously unfun. Later levels, though, actually showed some interesting features (the Elemental Fury duo of levels was quite interestingly themed, for example), and the Dragon end-boss was fairly interesting (although the model was a little dodgy from a modern perspective).

What I really was struck by, though, was my reaction to the changes to the canon of the original game. I'm probably unusual in actually believing that id software cares about canon in any of their games (and, indeed, indications suggest that id only really started to consider that plot had any actual significance around the point that Doom 3 was developed), but that's by the by.
Unlike Doom, where the invading Evil Forces were implied to be from Hell itself (an issue with theological implications that weren't properly explored within the game itself, or its sequels*) and, indeed, seemed to be partly motivated by the desire to acquire technology to augment their primarily magical society, the antagonists in Quake appeared to be less explicitly Evil and less motivated by technological gain.
Indeed, we can contrast the Cyberdemon and Spider Mastermind from Doom - the two most obviously technologically enhanced enemies in Doom, and also the most potent foes - with the Ogre in Quake - the only cybernetically enhanced enemy, and one faced in the first couple of levels. Clearly technology is not an interest of "Quake"'s followers - they already have technology, of a crude, pseudo-steampunk (or even clockpunk) nature most significantly demonstrated by their use of clunky "nailguns"† as ranged weaponry, and this seems to be as much as they care about. Indeed, all the significant enemies use magical ranged attacks, rather than this clunky technology thing.
The explicit inclusion of Shub-Niggurath as the end "boss" (although, of course, she doesn't attack the player herself) seems to be attempting to place Quake within the domain of Lovecraftian Horror; and hence, "Quake"'s motivation might be assumed to be ultimately unknowable.
Unfortunately, the mission packs both damage this perception to some degree.
Mission Pack 1 is the worst offender - while the Gremlins fit perfectly into the setting, the Centroids (a tough, Scorpion-with-attached-nailguns) seem jarringly out-of-place and Armagon himself seems disappointingly knowable (and rather Cyberdemon-like) - he's even described as one of "Quake's Generals", which seems disappointingly prosaic.
(Okay, so part of the problem here is that I'm trying to load too much subtlety into a genre which didn't, at the time, support it - still, Nyarlathotep or one of the other remaining Lovecraftian entities would have been better than Armagon's uninspired design.**)
Mission Pack 2 at least tries to reference some less-SF ideas - while I'm not sure that it works, the attempt at suggesting that various time periods have worshipped "Quake" as a deity was interesting; and the Elemental Fury levels (with Fire, Water, Earth and Air themed areas) and the associated iconography clearly references August Derleth's attempt at systemizing Lovecraft's setting (unfortunately, like Derleth's own attempt, it perhaps weakens the precursor somewhat). The "temporal energy converter" at the end, however, is Horribly out-of-place, being far too technical looking.

...I suspect I may be taking matters a bit too seriously.


*Note to the reading impaired: yes, this is sarcasm.
† I know that Splash Damage were probably just trying to make a nod to the original Quake, but the inclusion of the Nailgun in Quake 4 was one reason why I didn't buy it. The Nailgun is part of the Quake setting, not the Quake 2 / Quake 4 setting, and its existence in Quake 4 rankles with me. It's even worse that it even appears in Enemy Territory : Quake Wars as this is a prequel to Quake 2! One wonders why the Strogg stopped using nailgun technology (which, actually, doesn't even fit their technology level - while their medical processes seem crude, and their industrial processes needlessly destructive, this appears to be a matter of not caring, rather than lack of ability - their weapons are consistently more sophisticated than human weapons, and tend towards the SF energy-beam, rather than the steampunk "nail") after their failed invasion of Earth, just to bring it back after the (first) Makron was destroyed...
**Which doesn't stop part of me wishing that Quake 3 had been a complex multi-factioned RPG/FPS hybrid featuring the settings of Doom, Quake and Quake 2, possibly with a plot tree and multiple possible endings... Although that's also partly because I always thought the Arachnotrons from Doom were cute (and, hence, a storyline which allowed you to play as any of the four factions would be a good idea, clearly ;) )
Posted by Unknown at 13:52:00 9 comments: