The 21st of January saw the start of the first ever Home Season for Auld Reekie Roller Girls, pitting the  "steampunk/seagull" themed Leithal Weapons against the "zombie cheerleader" themed Cherry Bombers. Both teams, along with third and final home team, "80s John Hughes movie" themed The Skatefast Club, include a complete mix of skaters, from experienced Team Scotland qualifiers through to the newest rookies.
After an initial power jam to the Leithal Weapons' Admiral Attackbar (11:11) in the second jam of the bout handed them a 26 point advantage, the Cherry Bombers only managed to narrow the gap in the final few minutes of the bout itself, a brilliant power jam from Zillah (555) adding 29pts to their score, for a narrow loss of 171 Cherry Bombers to 179 Leithal Weapons.

The next bout in the season will be Leithal Weapons vs The Skatefast Club on the 25th of February.

For the first ever skateout for the two teams, the crowd was predictably excited. (VIDEO)

The first period started with a close fought jam between Leithal Weapons captain, Minnie Riot (7) and Cherry Bombers' Circuit Breaker (100), which went to time, neither achieving lead jammer status in their initial pass. Unfortunately for the Cherry Bombers, the second jam of the period saw Zillah (555) pick up a trip to the penalty box in her initial pass, handing a power-jam to Admiral Attackbar (11:11). The Leithal Weapons jammer, who had shown good form in Tattoo Freeze only the week previously, capitalised to pick up 20 points in grand slam passes before Zillah returned to the track.
For the rest of the first half of the period, the Leithal Weapons maintained their lead, winning the majority of lead jammer statuses, and scoring slowly but consistently. The Cherry Bombers only scored in three jams in that same period, jam 5 (VIDEO) after both teams had their jammers (Minnie Riot and VeloSidy (16) ) sent off in relatively close succession, jam 6 with an almost inseparable VeloSidy and Admiral Attackbar separated by a takedown of the latter by Zillah (as pivot) on their scoring pass, and jam 7, which saw both jammers (Leithal Weapons' Kaos Moss (84) and Cherry Bombers' Circuit Breaker) sent to the sin-bin simultaneously and the jam go to time.
By the start of jam 13, then, with only 12 minutes left in the period, the scores stood at:

With Leithal Weapons' Death Biffo (14) almost immediately sent to the sin-bin for a back-block major, however, this jam was the chance for the Cherry Bombers to start moving the score back their way. Some lovely pack control helped Zillah to pick up a 15 point power jam, with only some determined face-to-face blocking from Leithal Weapons' vice-Captain Alma Geddon (42) proving sufficient to slow her passes down, despite resulting in a trip to the sin-bin for Alma for blocking out of bounds.

Zillah's power jam seemed to reawaken the fight in the Cherry Bombers, the remaining third of the period staying fairly close between the teams; a rare trip to the penalty box for Admiral Attackbar towards the end of jam 17 (a lead jammerless jam) which extended over to the start of jam 18 (VIDEO) giving the biggest scoring opportunities for the Bombers' Zillah and VeloSidy. Coming into the final three jams, Circuit Breaker looked like she was going to make it three-for-three for Cherry Bombers scoring in jam 19 (VIDEO, also jam 20), slipping almost instantly through the pack and into lead jammer status while Kaos Moss was still at the back. A hard collision with the Leithal Weapons' rear wall on her scoring pass, followed up by a check by Midget Gems (873), knocked her to the track, however; by the time she'd regained her skates, Kaos Moss had whipped through a distracted pack to take the points herself.
Continuing their momentum, the Leithal Weapons' Yin And Bang (39) effortlessly took lead jammer in the penultimate jam of the period, with some particularly strong blocking from Death Biffo keeping Zillah from breaking through herself (and, in fact, seeing her off to the sin-bin for either the track cut or the back block involved). Despite the best efforts of the Bombers' Sunny Sheeba, the Leithal Weapons picked up a 16 point power-jam, before Zillah returned to the track with a last-minute scoring pass (apparently before the opposing team had even noticed she was back!).

The final jam (VIDEO) saw some exceptional blocking from the Leithal Weapons Bulletproof Glass (.357) and Midget Gems prevent Circuit Breaker from escaping the pack while Admiral Attackbar completed a natural grand slam; in the process of trying to escape, the Cherry Bombers jammer managed to pick up enough penalties to earn a trip to the penalty box soon after, although the Leithal Weapons had less use of the opportunity than they'd have liked, thanks to an impressive display of back skating by Bombers Captain and pivot Danger Mouth (55) forcing Attackbar to reenter almost a third of the track back from where she'd been knocked out.
With the period ending with Circuit Breaker still in the penalty box, the scores stood at:

With the second period starting on a power-jam for the Leithal Weapons, the Cherry Bombers' Sonny Sheeba, Danger Mouth and Bronx Betty (319, pivot) pulled out some strong cohesive pack work to slow Kaos Moss's initial pass, and hold her to only 3 points on her only scoring pass (VIDEO).
After a close jam between emerging rivals Zillah and Admiral Attackbar, jam 3 saw the first big scoring jam of the period, with Circuit Breaker taking lead jammer for the Cherry Bombers (despite spending a moment sandwiched between all four Leithal Weapons blockers), while Yin And Bang headed off to the penalty box. A back block major on her third scoring pass sent Circuit to the sin-bin herself, however, providing Yin and Bang with her own opportunity to fight through a strongly defensive Demon Speeding (333) and VeloSidy, picking up 5 points before the jam ended.

With the Leithal Weapons power-jam continuing into jam 4 (VIDEO), Death Biffo almost immediately gave the advantage up, sent off within seconds for what looked like a back block major. With Circuit Breaker released from the penalty bench after some brief confusion, she capitalised well, picking up another 11 points despite some lovely anchor work from the Weapons' Alma Geddon, before the jam ended with a returning Death Biffo finally completing her initial pass.
With the points now standing at:

it looked like the points differential was finally in danger of being eroded.
A elbows major for Zillah in the very next bout put paid to that possibility for a while, however, allowing the Leithal Weapons' Kaos Moss to pick up 17 points in the resulting power-jam; with Zillah picking up a track cut major almost as soon as she returned to the track, the Cherry Bombers were without a jammer for almost the entire jam; and the second penalty continued into jam 6, where excellent jamming by Admiral Attackbar picked up another 7 points before Zillah finally returned to the track, and the jam was called.
With the points differential now back to 46 points,


the Cherry Bombers would really have to work hard to have a chance of pulling out a win.
Despite Zillah leading the way in the very next jam with a 4-point single pass score, the subsequent 4 jams were dominated by the Leithal Weapons once more, with only VeloSidy sneaking in a single point score. The most determined skating was almost certainly that of the Leithal Weapons' Bulletproof Glass, knocked down four times in a row trying to complete her initial pass, but recovering with very nice rolls each time and never giving up. Rewarded by a power-jam in the second half of the jam, she picked up 7 points, to match the 9 points that Zillah had managed in the first half.
With Zillah outpacing Admiral Attackbar through the pack in the next jam (despite starting from the penalty bench), but without lead jammer, the scores stood at:

with 12 minutes left in the bout.
The next jam, jam 13, (VIDEO) with some exceptional blocking from Bronx Betty and Maulibu Barbie (581) holding Yin and Bang back and then sending her off, the Cherry Bombers' Circuit Breaker was in a position to start fighting back; however, she was given huge trouble in turn from the Leithal Weapons, in particular Minnie Riot, which limited her to a single scoring pass before calling it.
With Zillah and Midget Gems both managing a single scoring pass in the next jam (VIDEO), and Cherry Bombers captain Danger Mouth fouling out a jam later, it was beginning to look more and more like a certain victory for the Leithal Weapons.

With a brief ray of hope emerging just two jams later (VIDEO), Alma Geddon giving away a power-jam to Circuit Breaker, the points differential narrowed to just 26 points. However, the Leithal Weapons responded with a much more defensive play for the final minutes of the bout, holding the score near constant (VIDEO) until the final jam of the bout.
With only time for one more jam, and the score standing at:

Zillah needed to pull out all the stops to make a Cherry Bombers win possible (VIDEO). Fighting through to lead jammer status, while Bronx Betty and VeloSidy made life extremely difficult for Irn Mayhem (667), the Cherry Bombers jammer actually picked up a couple of grand slam passes before things got even better for her; Irn Mayhem picking up enough penalties to send her to the sin-bin. Capitalising fully, Zillah managed to acquire an impressive 29 points by the end of the jam, putting the final scores at a hard-fought: 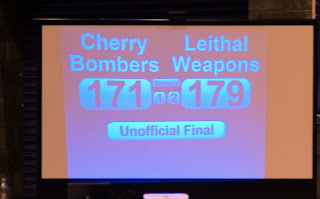 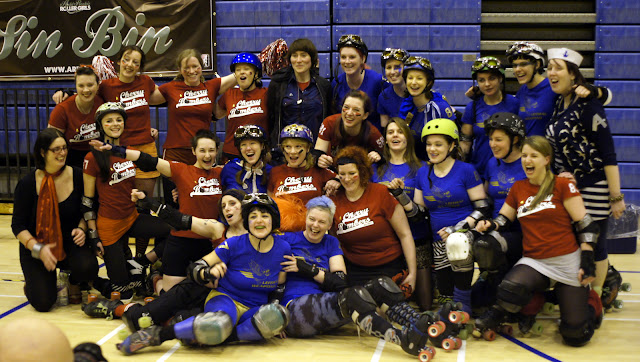 
Thanks to the Auld Reekie Roller Girls for a fantastic bout.

Your announcers were: Fay Bentos and Mo B Quick.

All video is available as part of a YouTube playlist here: http://www.youtube.com/playlist?list=PL206FD72375370D9B&feature=view_all