On the 20th, Auld Reekie's A-team, the Twisted Thistles, played the second Fringe bout, taking on Stuttgart Valleys' Rollergirlz in an international bout.
The last time the two teams played, the Thistles won a convincing victory, with 92 points to SVRG's 68; could they repeat the performance this time?

In addition to the rematch, this bout was special for featuring the last appearances of popular ARRG skaters Juicy Lucy (off to London, and the LRG), and Fight Cub (off to Aberdeen, and the GCRG). Obviously keen to make the most use of them before they left, the two featured in a huge number of the line-ups in the coming bout. (Okay, it's because Fight Cub's a great blocker, and Juicy Lucy is an excellent jammer, but...)

Before the bout, there's always the skateout, introducing our two teams. SVRG excelled themselves with a complex counterskating pattern (which was very difficult to film adequately).


-
Period 1
Starting from a no-score first jam, where Polly Purgatory (13) only just outpaced Juicy Lucy (666) out of the pack, the difference between the teams was impossible to call. The first jam is pretty much always a warm up and a chance for the teams to test each others' mettle, however...

Having apparently warmed up, the home team proceeded to dominate the next 6 jams, picking up 31 points to SVRG's 2 (both picked up in jam 4, by Polly Purgatory ), and taking the knee in most of them to hurry things along. Most of ARRG's gains came in two power jams, both exploited well by a fast Blazin' Phoenix (28), picking up 14 points in jam 3 and 9 in jam 7 .

Ironically, it was the last seconds of that 7th jam that gave SVRG the seed of their resurgence, the ARRG jammer getting herself sent to the sin-bin in her final scoring pass, and the final seconds of the jam. Starting jam 8 from a power jam situation, the away team's Polly Purgatory hextupled their score to 12 in a minute's play. Continuing SVRG's lucky streak, the 9th jam saw their Vegas (80) effortlessly gain lead jammer. Frustrated by her lack of progress, ARRG's Juicy Lucy handed her a Power Jam, track cutting once too often.
Although Vegas was forced to call the jam moments later due to great blocking from ARRG's Minnie Riot (7), SVRG took the knee into jam 10, allowing Blitzkrieg Baby (9) to take full advantage of the remaining solo time, picking up another 10 points for the away team.
Halfway through the first period, ARRG's initial lead had crumbled, the score now standing at a competitive:


31 ARRG : 25 SVRG
Stuttgart Valleys' run of power jams looked like it was about to continue for at least another jam, with ARRG Captain Zillah (555) attaining lead jammer, and then a trip to the sin-bin on her scoring pass. This time, however, SVRG fumbled the chance, their own jammer, Public Enemy (1) also getting herself sent off before she could score more than a couple of points, returning Zillah to the fray.
Zillah called the jam, handing the extra power jam time over to Blazin' Phoenix in jam 12, but she played it safe, just taking a single grand-slam pass before calling it herself.
After an official Time-Out, and with now only 10 minutes remaining in the first period, it was still all to play for, with just 11 points between the teams.
For the first time unaided by a power jam, SVRG grabbed points in jam 13, Polly Purgatory beating Zillah out of the pack and to a scoring pass. Trying it again, Vegas beat Blazin' Phoenix out of the pack in the next jam, but the ARRG jammer's superior track speed allowed her to pass her opponent; the jam was called no score. SVRG were tenacious in their new aggression, however, Blitzkrieg Baby also leaving the pack first in jam 15, but without lead jammer. Good blocking from pivot Public Enemy and Titty Twister held Zillah back in the pack for some time, however, so SVRG managed to pick up a couple of points before she could call it.
Now really pushing things, after a series of very short, low-score jams, SVRG took the knee into jam 16. Blazin' Phoenix took lead jammer, however, and a couple of points before Polly Purgatory got close to the pack.
The low-scoring, evenly-matched jams continued over the next 3 jams, the teams trading lead jammer, but not picking up many points either way.  (17, 19)


And then, with only about 3 minutes left in the period, jam 20 was finally a full length jam, although not by choice - neither Zillah nor Vegas attained lead jammer status due to unclean passes. With both teams blocking strongly in the jammers' scoring passes, Vegas managed to pick up enough minors to get sent to the sin-bin, handing Zillah a late power jam. A strong leading wall stopped Zillah from doing as much as she might have done, however, with Teaze The Tiger (16) and Noxious Angel (17) particularly problematic for the ARRG jammer. In the end, she only picked up 5 points by the end of the jam.
The final two jams, (21, 22) were back to the rapid pace of the majority of the period so far, with both teams picking up points in the penultimate jam, but Blazin' Phoenix proving her worth once again in the final jam, effortlessly taking the outside line past the pack while Alma Geddon (42) and Danger Mouth (55) slowed SVRG's Blitzkrieg Baby sufficiently to allow their jammer to pick up a brace of points.
At the end of the first period, the scores stood at:
57 ARRG : 45 SVRG
-
In the half-time break, there was always time to go buy tee-shirts, crafty things... and usually cake. This time the cake stall sold out of all of its produce, however; could the tension of the close bout have been giving everyone munchies?
In any case, people could still spend their cake money on other worthwhile causes, including the first appearance of the official Team Scotland merchandise.
Team Scotland's first bout is on the 10th of September, with the selected team members facing a team of those Scottish players who didn't get to be in the team ("The Rest").


-
Period 2
Coming back into the second period, Stuttgart Valley had a 12 point points deficit to make up. In the first jam, they showed how they planned to deal with it... jammer Polly Purgatory slipping through the pack first, but without lead jammer status. That wasn't so much of a problem, with ARRG's Juicy Lucy failing to get by a strong SVRG defence, led by Titty Twista (81) and Teaze The Tiger, without a bit of track cutting, robbing her of lead jammer status as well. Polly Purgatory proved the better at jammer-to-jammer blocking, knocking Juicy Lucy to the track, to increase her lead, while Titty Twista once more became the ARRG jammer's nemesis when she entered the pack. With Teaze The Tiger pushing ARRG blockers out of the way, the SVRG jammer picked up a mighty 13 points to ARRG's 3 - and it wasn't even a power jam! With only a single jam into the second period, the score now stood at a nigh-equal
60 ARRG - 58 SVRG 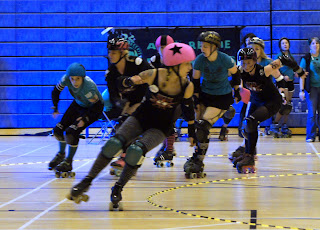 If the away team could have kept that level of play up, it would have been a very different second period. As it was, they seemed to have exhausted themselves for the next 3 jams, neither team scoring anything until the 5th jam.
The 5th jam, however, was worth waiting for, SVRG's Public Enemy picking up a single pass's worth of points, just enough to put the away team in the lead for the first time in the bout. Polly Purgatory continued the theme in the next jam, picking up a pair of points but unable to pass Minnie Riot and Fight Cub (182) to get the complete set.
Obviously, ARRG weren't going to stand for losing without a fight, and Blazin' Phoenix picked up her own pass' worth of points in jam 7, bringing the scores back to a fragile balance at:
64 ARRG : 64 SVRG
Galvanised by their brief experience of being the losing team, Auld Reekie led a fight back in the next five jams, Juicy Lucy, Zillah and Blazin' Phoenix all eking out single pass scores to inch the score back to a more comfortable margin. Jam 8 was a case in point, Fight Cub and Minnie Riot causing Polly Purgatory trouble in the pack while Zillah was safely through (despite an early bit of jammer-on-jammer blocking leaving Polly ahead).
Jam 13 could have been the deciding jam of the bout, Polly Purgatory getting herself sent to the sin-bin, and handing Zillah a power jam. However, before Zillah could do much with her advantage, the jam was called early due to an injury to one of the SVRG players.
After an official time-out for treatment, play resumed with the ARRG power jam still in play, and 15 minutes left in the bout.
SVRG took full advantage of the power jam, and the depleted ARRG pack, Polly Purgatory lapping the pack multiple times with no real opposition. With a massive 20 point total, the score was utterly reversed, now standing at:
79 ARRG : 87 SVRG
Despite Stuttgart Valley taking the knee in the next few jams, the momentum didn't really exist for them. While Blitzkrieg Baby took lead jammer in jam 15, Zillah was so close to her that she couldn't score; the next jam, Blazin' Phoenix found herself in the same situation vis Public Enemy.
Jam 17 finally saw some few points scored, Zillah fighting past SVRG's Titty Twista, and pivot ElliMinate (8) to score a trio of points before Vegas fought her way past Ciderella (-3°C) and Mallory Powers (9mm) at the rear.
With SVRG determined to preserve their lead as long as possible, and ARRG determined to erode it, the final 10 minutes of the bout was a fussilade of short, tightly contested jams, with neither team scoring a significant number of points.  (20 21 22 23 24) On balance, though, the home team had the slight advantage, inexorably grinding down their points deficit (and taking the knee repeatedly to gain the time to do so), until with only 41 seconds left in the bout, the score hung at
93 ARRG : 95 SVRG
Taking the responsibility firmly on her shoulders, team captain Zillah took the jam line for the home team, against SVRG's Vegas. All she had to do was gain lead jammer and pass just 3/4 of the opposing blockers on her first scoring pass to win*. After a hard fight, she managed the first part, but the away team weren't about to make it easy on her with the second. With Vegas close to starting her own scoring pass, Zillah called the jam at the last possible second, apparently passing her second blocker at about the same time...
...but the referees didn't seem to agree, the unofficial final score standing at:
94 ARRG : 95 SVRG
With such a close fought final jam, and such a close scoring point at the very end, the referees tripled checked every point, but the final confirmation didn't change anything; SVRG had won the bout by the narrowest of margins!
-
Awards and After-bout.
As usual, Roller Derby continued its tradition as the friendliest of sports, with the traditional post bout hug: 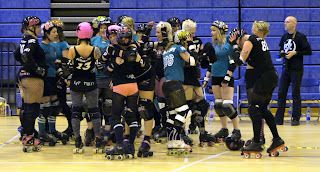 and the traditional post-bout awards, given by each team to their opposite numbers.

The video and photographs used in this report are all taken by me on a Sony A580 with the kit lens, and no flash. A playlist of video and album of photos from which they are drawn are at:
YouTube Playlist: http://www.youtube.com/playlist?list=PLE6AEAE2386064B40
Picasa/Google Photos album: https://picasaweb.google.com/102032801144714237554/ARRGTwistedThistlesVsStuttgartValleyRollergirlz20August2011?authuser=0&feat=directlink
(Also shared on Google+, and a copy on Facebook)

As always, this report, and any inaccuracies within it, are purely my own. All corrections and comments are gratefully received.
Posted by Unknown at 21:24:00