With only one weekend before the Roller Derby World Cup in Toronto, the last Scottish bout to be played saw Dundee Roller Girls' Silvery Tayzers play host to Fair City Rollers' Fear Maidens in nautically themed bout "Pivots of the Caribbean".
While the rematch was much anticipated, the Fair City Rollers were facing a much harder challenge than they had anticipated, with multiple players pulling out of the final line-up at late notice. With such significant last-minute changes, could they still fight to victory?

The Silvery Tayzers dominated the first period, only letting the Fear Maidens score once in the first 13 jams; the second jam seeing Dundee Captain Psychomilly (69) taking lead jammer easily, but finding her scoring pass difficult from the start, thanks to Fair City's Vice Jill Antonic (76), Terrifying Tink (8), and Pivot Zomboobies (8008), allowing the away team's Pistol Panties (6) to pick up some points in the split second before the jam was called. The Perth skaters weren't totally outplayed, however, managing to keep a majority of the jams to no-scores.
Thanks to the Fear Maidens' tenacity, the score differential remained relatively close, only reaching

by the end of the eleventh jam. Jam 12 was to change all that, however. Beginning with a slow start by Fair City to allow a sin-binned skater to return to the track, Nutshel (26), jamming, accelerated off the track, only to get caught behind the usual strong Tayzers 4-wall. Meanwhile, Dundee's Dr Carnage (T800) was forcing her way past Tenacious Dee (7) and  Pistol Panties on the inside-line to take lead jammer. Knocked to the back of the pack by Sins 'N' Needles (89), Nutshel appeared to cut track trying to catch up again, and was sent to the sin-bin. Handed their first power-ham of the bout, Dundee effectively slowed the pack, goating Terrifying Tink for a while, while Dr Carnage picked up laps. Despite some determined opposition from Tenacious Dee on her final pass, the Dundee jammer picked up 14 points to bring the score to a more intimidating 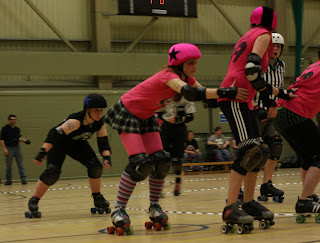 Jams 14 and 15 were the only times that the Fear Maidens managed to push the score the other way. The 14th jam saw Dundee's Cilla Block (24) exit the pack first, despite being knocked to the track by Jill Antonic at the very start of her pass, but a final block by Fair City's Pistol Panties (also jamming) caused her to cut track, denying her lead-jammer status. The Fear Maidens jammer was finding it exceptionally difficult to break out of the pack herself, however, with the strong Dundee blocking at the front of the track proving impregnable. A somewhat enthusiastic leaping check from Psychomilly made things a little easier, however, the resulting pile-up taking not just blocker and jammer down, but also Zomboobies and Cilla Block (just starting her scoring pass); with 'Milly immediately off to the sin-bin, the pack was thinned out just enough for Pistol Panties to fight her way through, almost neck and neck with her fellow jammer. Deciding it was worth the potential score, the Fair Maidens jammer went for her own scoring pass, both jammers passing through the pack together until a final block against Splatter Killer (3) brought Pistol Panties to her knees… and also to the sin-bin. Handed a power-jam, Cilla Block jammed a little too aggressively cutting track, to pick up her own trip to the sin-bin on her next scoring pass. Released from the sin-bin with only a few seconds left on the clock, Pistol Panties didn't have time to do much…

…but at least it meant that jam 15 would start with a full minute of power-jam for the away team. An official timeout put paid to this advantage, however, with both jammers ending up in the sin-bin at the start of the jam 15, Cilla Block leaving first, skimming effortlessly through the pack, and back into the sin-bin for track cutting! With Pistol Panties back in the running for a (brief) power-jam, she fought her way through to lead jammer status, managing a single scoring pass (despite last second opposition from Unprotected Bex (32) ) before calling it as the power-jam ended, with the score at 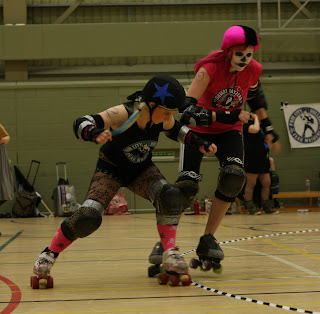 While the sixteenth jam saw Dundee pick up another 3 points, jam 17 started very badly for the Fear Maidens, DRG's Littlest Peepshow (666) taking lead jammer just before their own Tenacious Dee was sent to the sin-bin for a forearm block penalty. With her teammates holding the pack almost stationary, Peepshow easily completed her first scoring pass; and her second, despite a block from Fear Maidens pivot Jill Antonic sending her to the track, where she stayed. With the jam called early for injury (from which the DRG jammer walked away with no permanent damage), the home team had still picked up 8 points, a performance that Psychomilly only slightly bettered in the next jam, beginning with the Fear Maiden's jammer still in the sin-bin. With the Silvery Tayzers taking a knee, their jammer swept through a depleted Fair City pack, completing multiple scoring passes, even after Tenacious Dee returned to the track. Indeed, with Unprotected Bex, Crown Julez (67) and pivot Viva La Derby (42) taking turns to stop her, the Fear Maidens jammer remained on her initial pass for the entire jam, for 14 points to the home team!

The period ended with what looked to be another impressive jam by Dundee's Cilla Block, taking lead jammer with Teenie Bash stuck between a 2-wall at the front of the pack. With a big pile-up on her scoring pass ending in several skaters remaining still on the track, the jam ended early due to injury, with Dr Carnage seeing particular attention from the medics present. A single grand slam pass resulting wasn't anything to sneeze at, however, and with no skaters permanently injured, the period ended with the score: 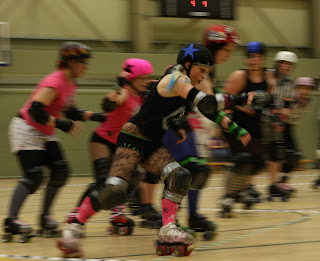 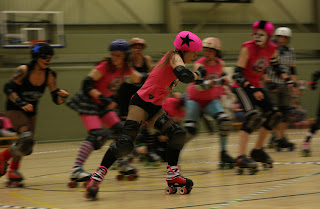 Coming into the second period, the Silvery Tayzers looked like continuing to dominate the period as they had the first, beginning with a 13 point jam for Cilla Block, without a power-jam. Things got a little more interesting in the second two jams, Teenie Bash dodging around DRG blocking to take lead jammer for the Fear Maidens in jam 2, picking up a single scoring pass for the away team, despite some aggressive blocking from Splatter Killer at the back of the pack, giving up jamming herself to try to stop her opponent. The third jam was more mixed, with the Tayzers taking a knee into the jam to exploit a pack advantage. Both jammers experienced tough resistance, but DRG's Littlest Peepshow won through the pack first, without lead jammer status. After picking up a grand slam pass, she was joined by Jill Antonic also failing to take lead jammer. With the jam running to time, the superior coordination of the Dundee skaters told, the Fear Maidens jammer being held in the pack on her scoring pass by pivot Viva La Derby until her own pivot, Pistol Panties, helped her out; only for Unprotected Bex to take her pivot's place. Nevertheless, Jill Antonic eventually won through, managing to begin her second scoring pass before time was called, moving the score to:


This surge of fight from the Fear Maidens couldn't last any longer, however, subsiding until the 7th jam of the bout. With the Silvery Tayzers picking up a big score in jam 4, keeping Teenie Bash locked in her initial pass, despite a hard fight (partly thanks to some fortuitous timing from DRG jammer Dr Carnage, completing her first scoring pass at precisely the right moment to knock an escaping Teenie to the ground), while picking up grand slam passes themselves, followed by a pair of less exciting single scoring pass jams, the score by the start of the seventh jam had moved on to 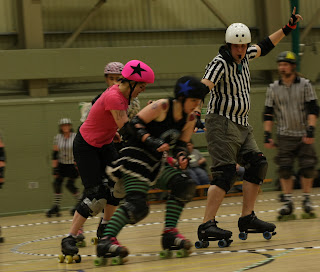 Jam seven saw the Fear Maidens fight back with a combination of skill and luck; with jammer Teenie Bash taking lead jammer, DRG's Crown Julez found unexpected opposition in the pack, starting with a casual block to the ground from Jill Antonic. Fighting her way through the inside line, the Dundee jammer cut the track, and was sent to the sin-bin; throwing a power jam to the Fear Maidens. An impressive display of jamming followed, with the Maidens slowing the pack enough for Teenie Bash to weave her way through it a total of four times before time was called, picking up a big 20 points to almost double her team's score!

This turned out to be an isolated incident, however, with the next seven jams all resulting in scores for the home team, and no points to the Fear Maidens. 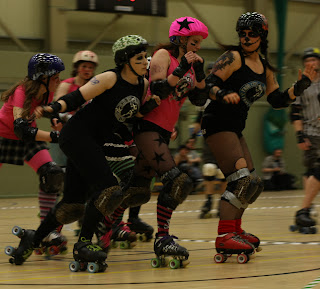 The Fear Maidens finally got a break in the 14th, Pistol Panties taking lead jammer, while DRG's Viva La Derby (42) was trapped at the back of the pack by pivot Knock-Turnal (616) and Tenacious Dee. Eventually fighting her way through her initial pass, the Dundee jammer only had enough time to score a pair of points while Pistol Panties completed her first scoring pass and called it.

Despite their best efforts, the away team couldn't maintain the pace into the next, Teenie Bash (2) perfectly matched against Splatter Killer for a no-score, leaving the score sitting at:

That was the last chance the Tayzers gave the Fear Maidens, the final five jams all going the home team's way. The bout ended with a final power jam, the Fear Maidens' Teenie Bash just slipping her skate outside the track while completing her initial pass to pick up a trip to the sin-bin rather than lead jammer. Dundee's Littlest Peepshow was happy to take the time to pick up last minute points, completing two grand slam passes before calling the jam, the period, and the bout, with a final score of:

While the Fear Maidens fought hard through-out the entire bout, the Silvery Tayzers showed their superior skill over-all. That said, there were exceptional performances by some Fair City skaters, in particular Pistol Panties and Teenie Bash jamming, and Jill Antonic and Tenacious Dee blocking. With a bit more pack cohesion, the Perth team could well have presented a significant challenge to the home team; perhaps next time, with the line-up they'd expected, they could fight to victory. 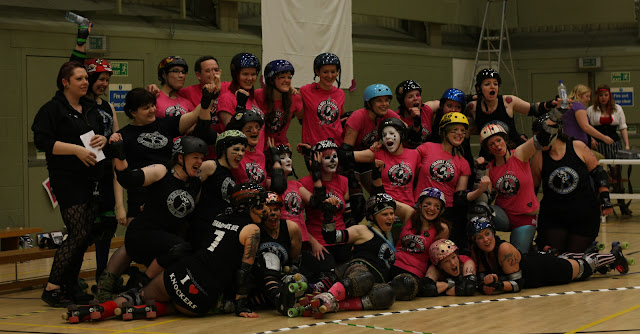 Thanks to Dundee Roller Girls and Fair City Rollers for a fantastic bout.
Thanks to FCR's Van Damn and DRG's Go Go Gadget Skates for the awards info.
And thanks also to Sins 'N' Needles for an excellent bout programme.

Your announcers were: Kinkhey (for DRG) and Detroit Dangerous (for FCR).

The text of this report is licensed CC:BY 3.0 (Creative Commons: Attribution) by me.

Note: this article has been updated with additional information concerning the background of FCR's entry to the bout, at 16:47 1 December 2011.
Posted by Unknown at 22:07:00

Awesome! Thank you for such a lovely report :D Always hard to remember what happened during the actual game, it's usually a blur!