With two new roller derby leagues appearing (in Livingston and "the Lothians"), and Auld Reekie Roller Girls holding their first Home Season, 2012 had already been a great year for Roller Derby in Scotland. The 12th of February only cemented this year's status, with Slaughtership Down seeing the first ever intraleague bout for Aberdeen's Granite City Roller Girls. Due to a lack of numbers, GCRG invited guest skaters from all five of the remaining skating leagues in Scotland (Auld Reekie Roller Girls, Dundee Roller Girls, Fair City Rollers, Fierce Valley Roller Girls and Glasgow Roller Girls) to fill out their numbers, making Slaughtership Down the first bout in Scotland to feature skaters from every bouting league.
Due to organisational issues with their new venue, Slaughtership Down could not be held in Aberdeen, the Granite City Roller Girls travelling down to Perth to use Fair City Rollers' impressive (if a bit Sodium-light) venue in Bells Sport Centre. On the plus side, 50% of Rollin' News, Mr X, was lucky enough to be in Scotland and managed to provide live-ish track-side score updates during the bout.


After a closely fought bout between both teams, the final score stood at 163 Woundwort's Warlocks: 146 Bigwig's Banshees.

Despite the first five minutes, and four jams, suggesting that the Warlocks had the advantage, with a combined score of 7 points to the Banshees' 0, this didn't survive the first power jam of the bout. A very slightly misjudged apex jump from 08 ended up with a trip to the sin-bin, handing the track to the Banshees' (and Fair City Rollers') Teenie Bash (2). Despite some spirited opposition, particularly from Warlocks pivot (and Auld Reekie skater) Crotch Lightning (T10), the Banshees jammer managed an impressive 19 point haul, her team's first points of the bout.

With Rock'n Riot (09) continuing the Banshees' scoring into the 6th jam, thanks to the Warlocks front wall splitting the pack. With the Warlocks' Crimson Chaos much less lucky with the pack, Rock'n Riot managed a single grand slam pass before her opponent caught her up, thanks to Clinically Wasted (111) and Shazmataz (360) knocking her off track before she could even start her second pass. (VIDEO)

After those two high scoring bouts, the score after 8 minutes, was:

Unfortunately for the Banshees, their scoring trend didn't survive any longer, with Hyndman (4), after a slow start to release players from the penalty box, and Ruby Riot (08) bringing home points for the Warlocks in the next two jams. If that wasn't bad enough, the Warlocks were also next in line for a big score, with Banshees' Rock'n Riot picking up a track cut penalty and time in the penalty box in jam 9. Warlocks' Clinically Wasted showed off the jamming skills that got her into the national team, pulling off a 17 point power jam before a back block penalty sent her off in turn; with only 20 seconds left in the jam, Rock'n Riot only had time to pick up a single pass before time was called.
With the Banshees power jam continuing into jam 10 (VIDEO), a knee start (one of the first jam-line pack tactics of the bout) allowed Auld Reekie skater Mallory Powers (9) to take full advantage of her remaining time, picking up a brace of grand slam passes, thanks partly to her blockers letting the Warlocks break the pack when trying to wall her in.
With the jam called as soon as Clinically Wasted returned to the track, this pair of back-to-back power-jams had left the score, half-way through the first period, at: 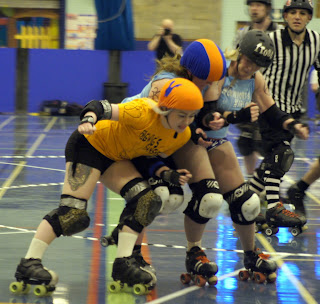 Another high-scoring jam was up next, however, with neither Warlocks' Hyndman and Banshees' Fight Cub (182) managing a clean initial pass, meaning that there was no lead jammer. The Banshees had the better time of the two minute jam, picking up 21 points to the Warlocks' 10, and extending their lead.

An interesting tactical decision by Rock'n Riot not to call the next jam after her first scoring pass meant that Clinically Wasted could prevent the lead being extended much more, before a power-jam for Hyndman in jam 14 (Krusty Thud (666) off, after attaining lead jammer) finally allowed the Warlocks to begin narrowing the gap, taking Sour Clout as a goat and slowing the pack nicely for their jammer. Despite Fight Cub's extremely powerful hip and shoulder checks making life difficult for Hyndman, a 15 point haul was enough to bring the scores within single figures of each other for the first time in ages.

With the next two jams seeing further narrowing of the lead (VIDEO) to only 5 points, a sequence of two power jams in the final three jams saw the scores shift even more radically; first (VIDEO) Teenie Bash pulling the Banshees' lead right back to 20 points (despite being knocked down on almost every pass by Terrifying Tink (8)) as a messy collision on her initial pass saw Clinically Wasted off to the sin-bin, and then, in the final jam, (VIDEO) a forearms/backblock penalty seeing Krusty Thud off to to the penalty area, allowing Clinically Wasted her own power-jam time, and an impressive 25 point haul, thanks partly to an increasingly depleted Banshees pack (the final 3 passes against only pivot Mallory Powers and Dundee's Unprotected Bex (32) ).

After this action packed final series of jams, the score at the end of the final score showed the Warlocks finally, narrowly, back in the lead:


Returning in the second period, the Warlocks continued their strong performance, dominating the first quarter of the period with single-pass scores for every jam. Despite this domination, low scoring meant that the Banshees still only faced a 12 point deficit 6 jams in.
The Warlock's total domination was only broken in the 7th jam of the period, a simultaneous sending off of both jammers (Teenie Bash for the Banshees, Ruby Riot for the Warlocks) resulting in there being no lead for the jam. Going to time, both teams capitalised, although the stronger Warlocks blocking, in particular from Fair City's Jill Antonic (76) at the rear of the pack, resulted in an additional pass for the yellow team, increasing their lead slightly to 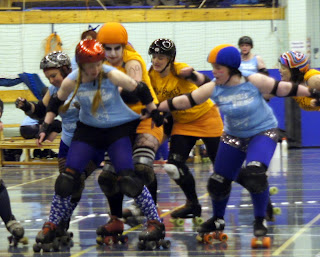 An official time-out looked like placing the Banshees back in a commanding position, the Warlocks' Ruby Riot being sent to the sin-bin for the next jam, placing Krusty Thud in a starting power-jam situation for the Banshees. However, the strong pairing of Terrifying Tink and Shazmataz (pivot) kept the Banshees jammer locked up on her initial pass for an entire lap, and prevented her from taking lead jammer, effectively reducing her score to a single grand slam pass.
Returning to the track after serving her time, Ruby Riot even had time to complete her first scoring pass before calling off the jam, as Krusty herself ended up in the penalty box shortly after the Warlocks jammer had returned!

With the Warlocks power-jam continuing into jam 9 (VIDEO), Hyndman took the opportunity to pick up a solid 9 points before a back block sent her to the penalty box, releasing Krusty Thud to return the favour for the Banshees.

With four closely matched jams following, the score barely moved until the next power-jam, in jam 14, the Banshees' Teenie Bash off with a track-cut penalty early in the jam, allowing Ruby Riot control of the track. Whilst her teammates slowed the pack effectively, the Banshees were in good form, forcing the Warlocks jammer to push their wall out of play to score on every pass, and culminating in some good recycling by Oates, neutralising the last pass entirely.

Still, the Warlocks had increased their lead slightly, to:

Now firmly in the final third of the period, (VIDEO) Fight Cub continued the Banshees' show of form, effortlessly completing her scoring pass along a wide open outside line, while Clinically Wasted was given trouble by Mallory Powers and Rock'n Riot. Completing two scoring passes (the first a little messier than the second) for Wasted's one, Cub seemed happy to call of the jam. With Teenie Bash and Hyndman equally matched in jam 16, and Mallory Powers and Frost Damage similarly so in the 17th jam, we had to wait for jam 18 for the score to change further.
Helped by a distinct pack advantage, 2 Warlocks blockers to 3 Banshees, Rock'n Riot took lead jammer with a 1/3 lap lead over Hyndman, but opted to take the second scoring pass before calling off the jam, allowing one of her players to serve her time in the box; in the process, the pack advantage reversed, Oates ending up in the sin-bin during Hyndman's scoring pass.

With less than 3 minutes on the clock, the score stood at:(VIDEO)

So, with the tactical advantage to the Warlocks, Fight Cub seemed unbowed, managing a lovely little apex leap to take lead jammer on the inside line, and a single, near effortless, scoring pass before calling the jam.

With a single jam left in the bout, the score differential had now narrowed to only 11 points; the game was still anyone's to call.(VIDEO)

With Teenie Bash facing off against Hyndman once again, it was Hyndman who escaped the pack first, although in the process picking up a back-block penalty against Unprotected Bex which sent her to the sin-bib. The Banshees jammer wasn't having a much better time of it, being pummelled by Clinically Wasted and Crotch Lighting at the rear of the pack. Eventually reentering just ahead of her blockers, Teenie Bash made the second trip to the sin-bin in this jam, causing Hyndman to be released after only 20 seconds in the penalty box, but neither jammer was now lead, so the bout would go to time. A Banshees rear wall started a difficult scoring pass for the Warlocks, with Fun Ghoul (4:48), Oates and Rock'n Riot all taking turns to obstruct Hyndman's pass until they inevitably split the pack. The delay was long enough for Teenie Bash to serve her own abbreviated time in the bin and begin her own scoring pass, but a blazingly fast Hyndman caught her still in this process, the Warlocks' own rear wall tactic proving just as effective. With the jam going to time, it was now down to pack work to manage the number of passes each jammer would be allowed to make; with the Warlocks already holding a single pass advantage, there was little change in the relative scores throughout the rest of the jam, bringing the final score to:

Thanks to the Granite City Roller Girls for an excellent bout; to Fair City Rollers for hosting, and for all the other guesting leagues and skaters.


Video, photographs and text in this article are licensed CC:BY 3.0 (Creative Commons Attribution license: free for copying and reuse, as long as I am attributed as the author).

All video is part of a YouTube Playlist:
Video: http://www.youtube.com/playlist?list=PLCCAA600EF99F5886&feature=view_all

and all photographs part of a Picasa web album
Photo: https://picasaweb.google.com/102032801144714237554/SlaughtershipDownGCRGIntraleague12Feb2012?authuser=0&feat=directlink

Video and photographs taken with a Sony A580 with a Minolta 35-105mm lens.