[Due to the amount of video for this bout, thanks partly to the generally short jams and frequent time-outs, it's probably best for you to follow the videos through the playlist linked at the bottom of this article, rather than my disfiguring the text with 24 video links.]

The first period opened with a series of very short jams started with jam-line knees, setting the tone for the bout as a whole. With neither team managing to establish a lasting lead after the first 11 jams, the score sat at a close (and low) 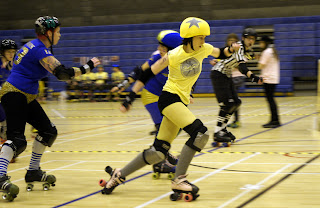 All that was set to change, however, with jam 12 finally breaking the pattern of the previous 10 minutes. With Sharkée (273) for the Leithal Weapons up against Sweet Sinner (99) for The Skatefast Club, it initially looked like the lemon team's jam, Mo B Quick (66) and Bint Imperial (893) holding back the Leithals' jammer at the front of the pack. With lead jammer, Sweet Sinner decided to go for the points, not calling the jam after her first pass. This seemed like an even better decision when Sharkée picked up penalties on her own scoring pass, sending her to the sin-bin for a head block. The Skatefast Club didn't get to enjoy their power jam for long, however, Minnie Riot (7) forcing their jammer to pick up penalties breaking through the Leithal Weapons' wall, sending her to the penalty box (and releasing Sharkée once more).

All that excitement had boosted both teams scores, but more importantly for the Leithal Weapons, it meant that the very next jam started with Sweet Sinner still in the sin-bin, giving Admiral Attackbar (11:11) a few seconds of power-jam to pick up her lead, aided by a knee start from her team mates in the pack. In fact, even though she did take lead jammer with her usual skill, Attackbar didn't need to worry about rushing; a returning Sweet Sinner almost immediately picked up a track-cut major, skating right back into the penalty box again! With pivot Alma Geddon (42) and Ciderella (3) taking turns disrupting the (stationary) Skatefast wall for her, Attackbar had no problems in picking up a 25 point power-jam. The jam called with excellent timing just as Sweet Sinner stood up for her final seconds in the  sin-bin, Minnie Riot took advantage in jam 14, dodging around a very defensive Skatefast Club forward wall to take lead jammer, and scoring a single pass before a final check from Crazylegs (11) saw her call the jam from the track floor. 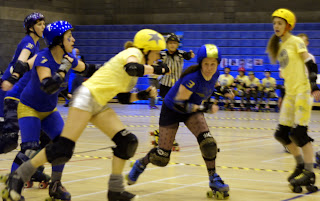 The Skatefast Club weren't about to give up just like that, of course, and the next 5 jams saw the points drift only slightly further apart, with the ladies in lemon giving just as good as they got.
Double D'struction (34) surrendered another power-jam to the Leithal Weapons in jam 20, however, giving Kaos Moss (84) the chance to further widen their lead. Despite only having two blockers (Tartan Tearaway (509) and Mallory Powers (9)) on track, The Skatefast Club still managed to give the Leithals' jammer a hard time, seeing her sent to the penalty box herself for a collision with a kneeling Tartan Tearaway. A freed Double D'struction did her best to exploit her own advantage, only to be sent to the sin-bin again herself; on her second release, a fully stocked Skatefast pack stopped Kaos Moss from fully completing her own scoring pass before time expired.
Playing Admiral Attackbar to exploit the brief remaining power-jam time, the Leithal Weapons effectively got a free scoring pass out of matters, bringing the score to

The Skatefast Club had an opportunity to fight back in the very next jam, however, with an initially promising jam from Sharkée, completing her first scoring pass while Tartan Tearaway was still locked up in the pack, ending in a slightly overambitious attempt to sneak through the inside line on her second pass, a forearm penalty and a trip to the sin-bin. Despite the power-jam situation, some fantastic blocking and recycling by Cider and Minnie Riot, predominantly, kept The Skatefast Club scoring to a mere 6 points before their jammer returned to the track and the jam was called.

A perhaps slightly demoralised Skatefast Club couldn't do much more than limiting the Leithal Weapons to single-pass jams in the final three jams of the period, bringing the score at half time to: 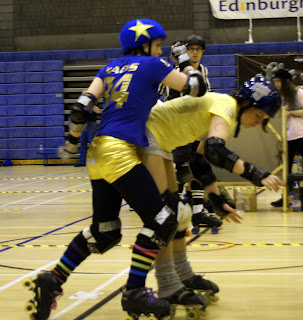 Beginning the second period with a big deficit to make up, The Skatefast Club had to quickly show that they could start controlling jams and picking up points.
After a messy jam 2, starting with as a power-jam for The Skatefast Club after time-out sent Sharkée to the penalty box before the jam started, ended up with Bint Imperial off to the sin-bin in turn after a collision with Alma Geddon handed her a back block major, the jam ran to time with no lead jammer status. On balance, some exceptionally resilient walling by the lemon team (in particular, Crotch Lightning (T10) and Crazylegs as linchpins) helped to bring the balance slightly back their way, the score sitting at

With a pair of less decisive jams following, it took until the 5th jam of the period for the lemon rebels to really show their mettle, some beautiful defensive packwork by The Skatefast Club's Mallory Powers, Double D'struction and Crazylegs keeping Kaos Moss locked up inside the pack for multiple grand slam passes by their own Bint Imperial. 14 points in one jam was enough to reduce the points deficit to its lowest value since halfway through the first period, just 59 points separating the teams.

While The Skatefast Club began taking knees to push their advantage, some more exceptional jamming from the Leithal Weapons Admiral Attackbar and Ciderella kept the Leithal Weapons score accruing slightly faster than their opposition. The final example of these, in jam 11, also saw the start of a run of time-outs post jam, in this case sending The Skatefast Club's Double D'struction off to the penalty box for jam 12, thanks to penalties picked up as she plowed into the back of the pack at the end of the previous play.
Another power-jam for the Leithal Weapons looked like capping things off, then, with only two blockers on track from each team. Skinn'er Alive wasn't having any of this, however, and provided some stern opposition to Sharkée, jamming; what looked like a forearms major against her finally sending the jammer to the sin-bin as the jam ended. 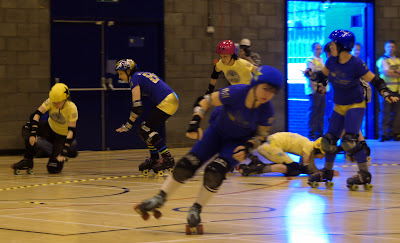 An unexpected power-jam for The Skatefast Club's Bint Imperial looked like it would provide some much needed momentum to the ailing team, then, but some fantastic walling and recycling by the entire Leithal Weapons side of the pack helped to minimise her effect. Despite the difficulty, this was still one of the biggest scores the ladies in lemon had made in the period, a big 14 points to their score.
However, another official time-out immediately after the jam ended resulted in Bint Imperial being sent to the sin-bin, handing the Leithal Weapons a chance to immediately come back; which they did, in 2 successive jams (thanks to good call timing again by Admiral Attackbar in the first, allowing Sharkée a brief uncontested time on the track next),
The end result, then, a gaping of the blue water between the two teams scores, now sitting at:

With 11 minutes left in the bout, it was starting to look like an increasingly safe game for the Leithal Weapons, but The Skatefast Club could still come back and at least reduce the difference between the scores.
A power-jam for Mo B Quick three jams later might have done the trick, providing 14 points, but that marked the tail end of the 80s girls' scoring.
Amidst an increasingly time-out heavy final 7 minutes and 9 jams (the time-outs were actually longer than the jams), The Skatefast Club only scored two more passes, while the Leithal Weapons picked up 24 points, 9 of them in another impressive display of jamming from Admiral Attackbar in the second last jam of the bout.

Perhaps a slightly disappointing debut for the third of Auld Reekie's home teams, admittedly playing without one of their stronger jammers, Blazin' Phoenix. That said, the Leithal Weapons showed excellent form both offensively and defensively, and the score certainly reflects that they really earned their place in the final.

Thanks to the Auld Reekie Roller Girls for a fantastic bout.

Your announcer was Stephen Tawking, ably assisted by the ubiquitous Psychomilly.

All photographs are available as part of a Picasa album here: https://picasaweb.google.com/102032801144714237554/AuldReekieRollerGirlsHomeSeasonLeithalWeaponsVTheSkatefastClub?authuser=0&feat=directlink
and also on Facebook.

All video is available as part of a YouTube playlist here: http://www.youtube.com/playlist?list=PL1EF3DC53216C3E52&feature=view_all