A hot and humid day in Dundee greeted the superheroic battle between the Glasgow Roller Girls "Maiden Grrders" (away) and the Dundee Roller Girls "Silvery Tayzers" (home) in the bout known only as Spiderjam. Despite their home advantage, the Tayzers' powers proved inadequate against the might of the Grrders, the final score resting at 44:191 to the away team.

Spiderjam had always been planned with a Superheroic theme, and both teams fulfilled this to great effect (although the Tayzer's Viva La Derby (42) won this for the home team singlehandedly, having apparently subjected herself to gamma radiation to expand her full sporting potential).

After the kit inspection, and a demonstration of the basics of derby for the newbie spectators, the bout began.

The very first jam of the bout set something of a theme for the home team: despite proving fairly evenly matched (although GRG's Slain Austen (823.7) got Lead Jammer), DRG Jammer Psychomilly (69) lived up to her name and managed to get sent to the penalty box for her involvement in a multiple pileup during her scoring pass.
Jams 2 and 3 were both power jams for the Away team (Psychomilly being sent off again in 3 after just managing to score in 2!), Sykes (360°) and Hardcore Prawn (88mph) making the most of their advantage to bring the score to 5:36, despite nifty blocking from DRG's Vice Captain Littlest Peepshow (666), Thunder Cat (82) and Viva La Derby. 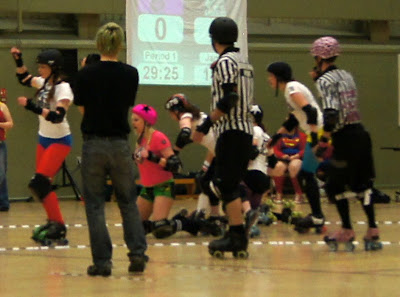 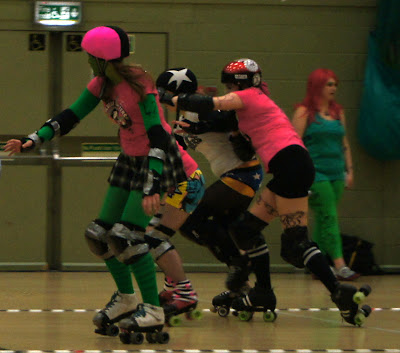 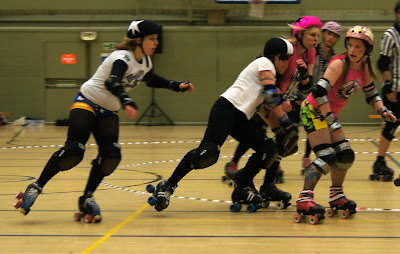 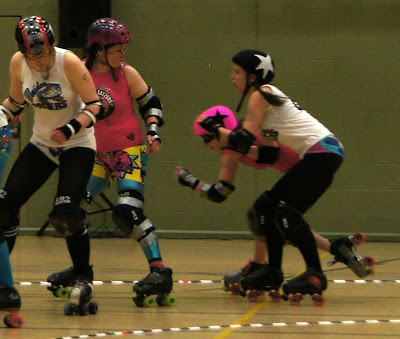 Despite GRG's Marshall Lawless (42) deciding to try out the penalty bin for size in the very next bout (tumbling over a prone Unprotected Bex (36*), excellent blocking work by GRG's Fighting Torque (531), Scara-leigh (616) and Tarcenic and Old Laces (41) limited the damage done by Littlest Peepshow's power jam to 9 points.
With the next jam called off with no score by DRG's Cilla Block (24) as LJ unable to outpace Slain Austen, the score after the 5th Jam of the bout stood at 14:37. 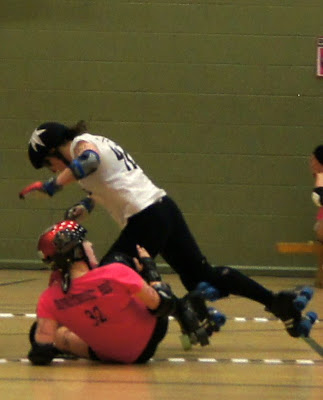 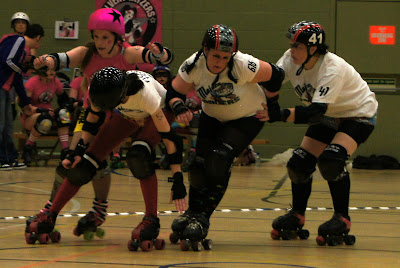 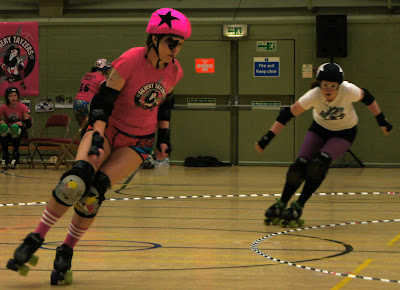 An official Time-out was called, giving everyone a bit of a breather.

After normal service was restored, an excellent jam by GRG's Wild Oates (3) combined with effective blocking out of Viva La Derby (jamming) by Sykes (pivot), Coco Pox (76) and GRG Captain Venus Velocity (666) garnered 12 points for the GRG, without even a power jam situation.
Understandably shaken, the Dundee Roller Girls called a time out immediately. 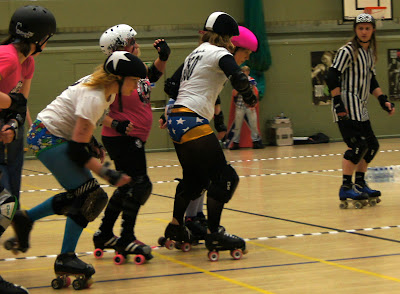 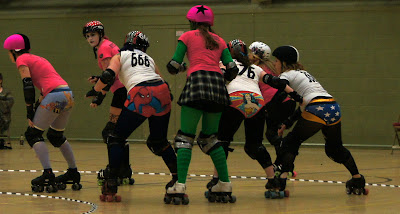 Their morale restored somewhat, DRG resurged slightly in the next jam, but failed to score. The eighth jam of the bout, however, saw the most active penalty area yet. Multiple collisions sent 3 DRG players, including Jammer Dr Carnage (T800), to the penalty area, handing a power jam to GRG's Sykes. It wasn't long before Sykes herself managed to commit a fourth minor and send herself to the penalty area, letting Dr Carnage back out just in time to score some points herself! Points 16:60 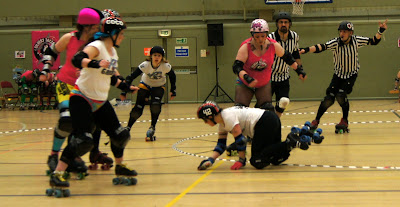 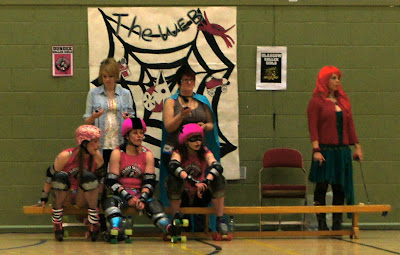 All these collisions were obviously taking their toll on the track, as another official Time Out was called to allow spot repairs to be made, whilst the DRG blockers whiled away the time dancing! 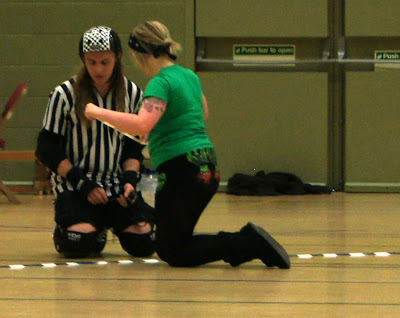 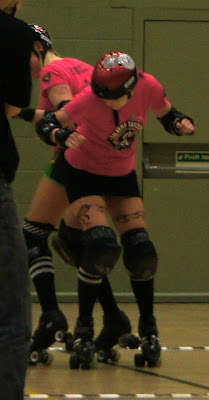 When we returned to action, DRG failed to capitalise on their starting Power Jam, Cilla Block scoring no points, and calling off the jam as soon as Sykes returned to the track.

The tension was clearly building, as the next jam saw Slain Austen pick up 5 points for GRG, prevented from acquiring more by an impressive block by DRG's Splatterkiller (3) in her second scoring pass. 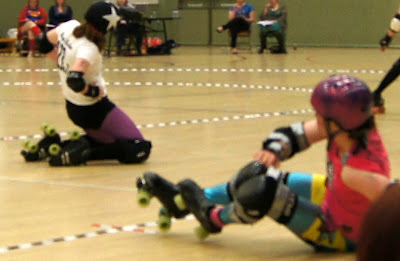 More musical penalty boxes followed in the next couple of jams, with GRG's Hardcore Prawn first ending up in the box, only to be sprung by Psychomilly, becoming something of a regular in the box this bout. With the score at 16:83, the Dundee Roller Girls clearly needed to do something to get more points. In the next jam, they tried a radical new tactic that failed to work in the way intended: despite GRG's Marshall Lawless calling off the jam after being passed and knocked down by DRG's Splatterkiller, DRG continued to play the jam, with Splatterkiller completing a scoring pass before referees managed to get the players' attention.

Perhaps needing to evaluate this exciting new tactic for their own use, GRG called a time-out, allowing DRG to get in some more dancing practice. 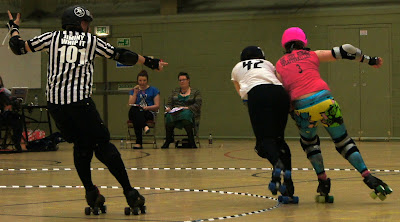 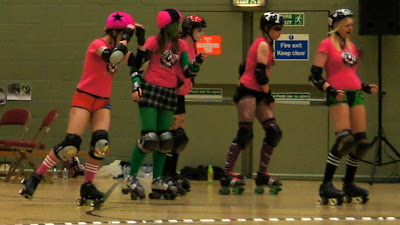 Whatever they decided regarding the concept of ignoring the referees, the next two jams of the bout saw GRG returning to a more defensive blocking procedure, first holding DRG's Cilla Block back whilst Chemikill Hazard (LD50) made multiple scoring passes, then managing less well against Dr Carnage but still handing Sykes a massive lead.
With the score now at 16:94, DRG's Viva La Derby hulked out enough to break through the pack at the same time as legendary Hardcore Prawn, but she'd have been better off tapping into the Speed Force as Prawn powered past her to pick up points. 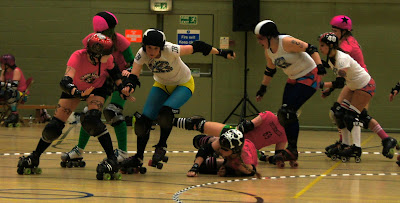 The final jam of the period was something of a brawl. DRG Jammer Littlest Peepshow actually managed to briefly outpace the pack to pick up LJ (DSC01371), only to be knocked back to the back of the pack, so that GRG's Fighting Torque actually emerged ahead of her with quite a lead. Peepshow powered on, though, and some excellent blocking by teammates Splatterkiller, Crown Jewels (67)* and Whiplash Trash (36) allowed her to pass Torque on the scoring pass, and make a second loop herself.

All this was too little, too late for the first period scores, standing at half time:

Second Period
Entering the second period, the GRG players seemed well aware of their commanding lead and played the first jam cautiously, Slain Austin calling off the jam after a single scoring pass and a nice little hop.
Despite excellent teamwork allowing DRG's Cilla Block to power through the pack for an apparently easy couple of points in the next jam, the tremendous speed of Marshall Lawless eroded that advantage and both teams scored points.
The next couple of jams went easily GRG's way, with Hardcore Prawn and Fighting Torque speeding around the track, whilst the DRG Jammers were held back in the pack. 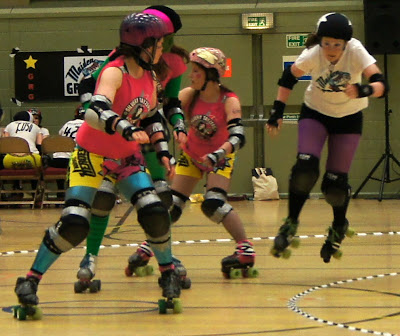 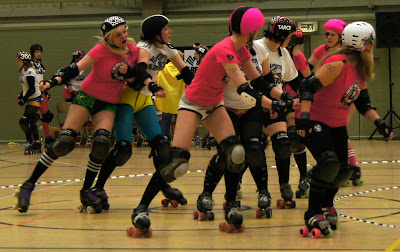 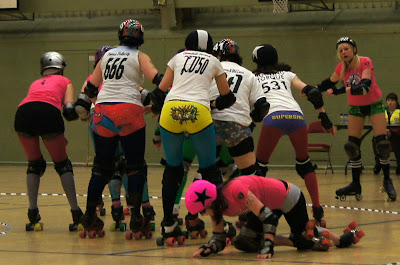 After an official timeout which resulted in a DRG player being sent to the penalty box for an accumulated 4th minor, play resumed with business much as usual for GRG.
Apart from one tightly contested no-score between Cilla Block and Sykes, (and a single jam where nice blocking of Sykes to the floor by Splatterkiller gave Psychomilly an easy lead), the GRG continued to pick up points in single scoring passes, with Marshall Lawless, Chemikill Hazard and Slain Austen all contributing to the pot. 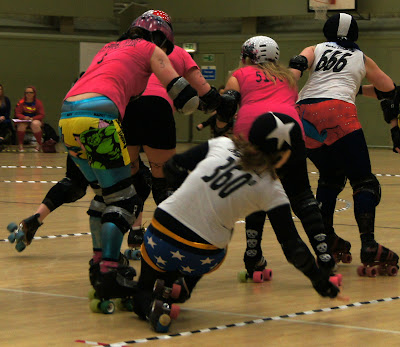 Approaching the final quarter of the bout, then, things were already looking fairly bad for the home team, with the score at 31:129 against.
Worse, Cilla Block had managed to get herself sent to the penalty box at the end of the last jam, handing a power jam to the GRG. Despite some effective blocking from Unprotected Bex and Psychomilly and a huge GRG mass tumble, Hardcore Prawn did what she does best, and hauled in another 24 points!
In her desperation to get points, Cilla Block managed to end up back in the penalty box again, handing GRG yet another Power Jam (after an official time-out due to confusion over the penalty) just when the Home team could least afford it. This time, however, the Dundee blockers did a much better job of controlling the pack, preventing Sykes from passing before Cilla had served her time, and then obstructing her scoring pass almost completely as well. 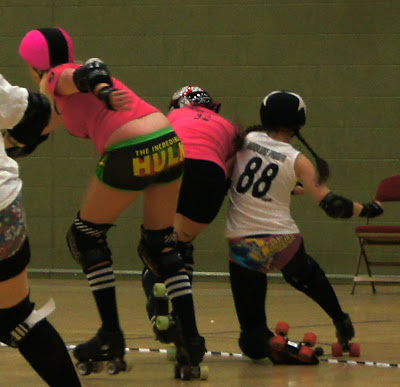 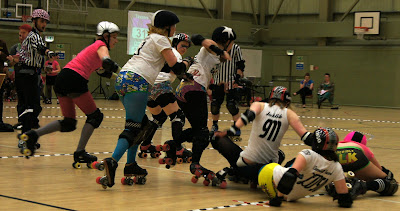 Still, with the score now at 31:155, it was time for another Dundee time out to restore morale.

Whatever wisdom was passed to the DRG players apparently failed to make much impact when play resumed, the next four jams (including the 13th jam of the bout:
13th Jam, 2nd Period here: http://www.youtube.com/watch?v=5f1RCXXlRsY
) passing with almost no scoring from either side, jammers being fairly evenly matched and unable to create good leads.

Unfortunately for the DRG, Splatterkiller, jamming for the first time this bout, managed to commit a minor and get sent to the penalty area right at the start of the jam, followed over the next 60 seconds by most of her teammates. With only one DRG blocker (Alison Thunderland (18)) on the track at one point, Marshall Lawless easily garnered another 19 points from the power jam, calling it off just as Splatterkiller returned to the track.

With only 6 and a half minutes left in the period, and the bout, tension was hotting up.
While Hardcore Prawn effortlessly escaped the pack in the next jam, a massive fall led to her being penalty binned, allowing Splatterkiller to finally claw some points back for the Home team, although not without getting sent to the penalty bin herself just before the end of the jam.
With the pendulum swung the other way, Power-jam wise, Wild Oates had a rather disappointing time of it, heavily blocked by a Dundee pack desperate not to open the points gap even further. 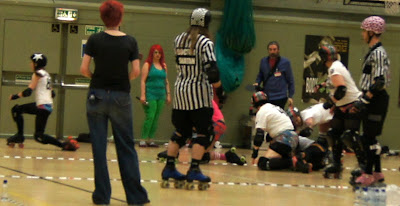 With less than 4 minutes in the bout, the Tayzers showed a sudden surge of aggression, with Dr Carnage and Psychomilly both managing to score in the final moments (although, unable to prevent some points accruing to the GRG mainly via Slain Austen).

With nothing as potentially balance altering as a series of power jams to rely on, however, the resurgence came simply too late to change the overall balance of things, and the bout ended with the final score:

Thanks to the @DundeeRG twitter feed for providing live tweets which contributed to the composition of this bout report. Thanks also to Bout Announcers Helliverance and Kinkhey for live commentary, and to GRG and DRG for generally bouting and also baking.

All photographs in this report taken with a Sony A580 with the kit lens. (At ISO800, 1/200 second exposure, shutter priority.) They were processed in Picasa.


*due to some discrepancies between the bout programme and the numbers/names on shirts, I've mostly assumed that shirts were correct when the programme disagreed.
Posted by Unknown at 18:22:00